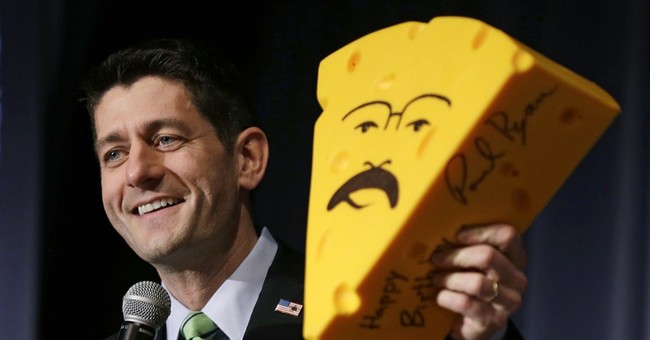 I'm on the record as disdaining all polling for a presidential race in which the very first ballots won't be cast for at least another 105 weeks, but let's face it: The political news cycle is grinding to a Christmas-induced halt, and the content machine doesn't feed itself. So it's with great trepidation and no small amount of self-loathing that I present you with a meaningless 2016 poll from Iowa's largest newspaper:


Iowa Republicans are wowed by Paul Ryan, a new Des Moines Register Iowa Poll shows. Mitt Romney’s 2012 running mate is wildly popular here with a 73 percent favorability rating, a surprise finding that reveals he’s at the forefront of potential 2016 GOP presidential candidates in the nation’s kickoff voting state. Two former winners of the Republican caucuses have the second and third highest favorability ratings among voting-age GOP’ers — 66 percent for Mike Huckabee, 58 percent for Rick Santorum — among 10 buzzed-about Republicans tested in this poll. But their popularity isn’t as striking as the overwhelming affinity Iowa Democrats have for Hillary Clinton, with 89 percent saying they have a positive opinion of her. Just 7 percent of voting-age Democrats have a negative impression the former U.S. secretary of state and U.S. senator from New York.


This isn't exactly a head-to-head presidential poll per se, but the favorable/unfavorable numbers provide a decent enough window into how the potential contenders stack up in Iowans' minds. And in case you'd forgotten, Iowans vote first. Hillary is going to be the runaway favorite on the Democratic side, especially now that left-wing darling du jour Elizabeth Warren has confirmed that she won't throw her hat (or whatever it is that fake Native Americans wear) into the ring in 2016. I doubt very much that Team Clinton is quaking over a stiff challenge from this guy. Over in GOP land, Paul Ryan currently stands heads-and-shoulders above his potential competition -- although this Des Moines Register poll was taken just as the budget deal he hammered out with Senate Democrats began to shove its way onto front pages across America. It's conceivable that Ryan may have taken a hit with the base for engineering that compromise, but he's been given plenty of cover by conservative allies and Thursday's lopsided House vote. Plus, Iowa Republicans may not have much of an appetite for 'RINO' purging these days. Take a look at the favorability ratings for the various rumored contenders below -- and keep going until you reach Sen. Ted Cruz's numbers:


Cruz is by no means unpopular among Iowa Republicans -- his net favorables are middle-of-the-pack -- but he's at the bottom of the positive marks list. This might be an indication that shutdown politics damaged his brand slightly, even among the party faithful. Too bad he only has two full years to "rebound," which underscores why I really loathe these polls. But since we're engaged in this silliness, I might as well serve up one last nugget of political click bait. Hey, at least this story is about a 2014 race:


Donald Trump says he will decided soon about whether to challenge New York Gov. Andrew Cuomo (D) in 2014, but it doesn't sound like he's apt to do so. "I'll make a decision ... some time pretty soon," Trump said Monday on "Fox and Friends." Trump added that he hadn't previously considered a campaign but that New York Republicans have prevailed upon him to think about it. "Let's see what happens," he said. "You know, I had something else in mind. This was not actually something I wanted to do. I love the state; I love the country. But they feel very strongly about it. So at some point I'll make a decision."


Before you ask, yes -- he's still up to his old tricks. Oh, and he's not a conservative. And apropos of nothing, I'll leave you with the top viral YouTube video of 2013. Because this post deserves it: