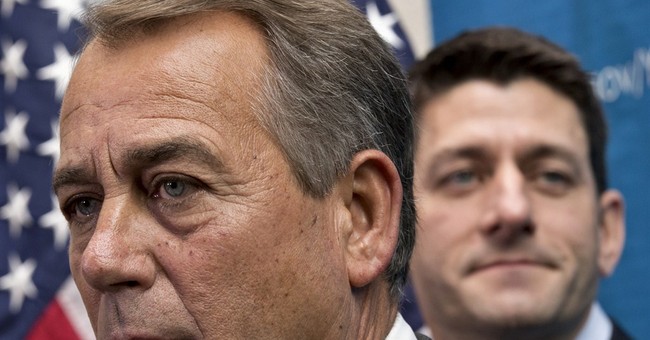 
The Republican-led House of Representatives will vote this evening on a bipartisan two-year budget proposal hammered out by Rep. Paul Ryan (R-WI) and Sen. Patty Murray (D-WA) in advance of their conference committee deadline. Let's be frank: This "compromise" is a fig leaf that benefits the GOP politically more than it advances any real conservative policy goals. As such, conservatives are beating the hell out of each other over the deal -- because beating the hell out of each other seems to be the Right's raison detre these days. In one corner, you have Bill Kristol, Pete Wehner and Yuval Levin:


It seems to me that the details look a fair bit better than the general outline that had been reported in the press over the past week or so, particularly on the question of whether the entitlement cuts that would replace some discretionary sequester cuts could be expected to actually materialize. As it stands, this strikes me as more or less a very small-scale version of the sort of thing that Republicans hoped might be made possible by the sequester but Democrats insisted could not be: a trade of discretionary savings for mandatory savings without real tax increases...A deal that keeps in place 92 percent of the sequester, replaces the rest (and adds more savings) with fairly durable mandatory savings and other small reforms, and avoids the tax increases the Democrats want would, I think, advance that cause a little. There’s not much to celebrate here, and there won’t be until the Democrats no longer control the Senate and the White House, but there’s not much to bemoan either, and this deal would make it more likely that the Democrats will lose that control.


Across the ring stands our own Conn Carroll, and conservative groups from AFP, to Freedomworks, to Heritage Action, to the Club for Growth who are coming out hard against the bargain. Some critics are also pointing out that by rushing this plan to the floor for a vote, Boehner is violating one of the governing pledges he made upon ascending to the Speakership:


The "they" Boehner begins lambasting at the (0:45) mark of that video is outside conservative organizations like the ones enumerated above. While I happen to concur that some of these groups helped erect unrealistic expectations over the ill-conceived "de-fund Obamacare" shutdown melee -- perhaps, in some cases, for cynical reasons -- I'm not sure how Boehner antagonizing the grassroots helps matters. Some of his own allies seem to share that frustration:

Three responses to Boehner from staff on plan-backing side: "Thank you so much for making this harder." "PLEASE SHUT UP." and "wtf."


Dan covered Paul Ryan's spat with Marco Rubio over the latter's quick critique the budget plan, and now the House Budget Committee Chairman's staff is seeking to tamp down conservative anger over a "point of order"-related provision buried within the compromise that would make it slightly easier for Harry Reid to move a tax increase out of the Senate. Team Ryan insists that the Senate GOP's ability to filibuster a tax hike remains intact. It wouldn't be Christmas in DC without a giant Republican clusterfark, would it? Over on the Democratic side, Nancy Pelosi is encouraging her members to, um, "embrace the suck" and back the plan. Most indications I've seen suggest that the budget compromise will pass with a combination of Republican and Democratic votes. Whether Boehner will need to break the so-called "Hastert Rule" to pull it over the finish line (meaning, a majority of House Republicans vote 'no') remains to be seen. A senior GOP aide with knowledge of the preliminary whip count tells me they expect "more than half" of the GOP caucus will support the measure. If Ryan-Murray indeed advances through the House, Senate sources say they expect Harry Reid will take it up next week. Stay tuned for the final tally, which will come down around 6 pm ET. In the meantime, here's Boehner's follow-up rant, laying into conservative groups. His "are you kidding me?" outburst comes roughly 90 seconds in:


Ryan-Murray takes "giant steps" in the right direction? C'mon -- even Paul Ryan isn't trying to dress this thing up as some big win. Again, being a filthy, gutless RINO, I actually sympathize with Boehner's message here -- at least as far as it pertains to the shutdown mess. But what purpose does this public statement serve?