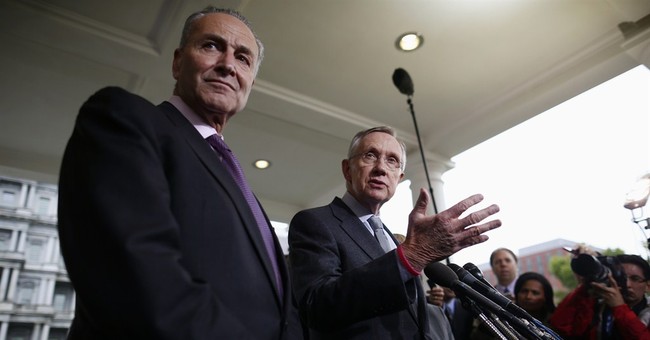 It's for America, you must understand:

WaPo reports that Democrats are adding a new goal to their shutdown strategy late in the game: Break the Republicans http://t.co/TH1j7fCI3v


The Post story details the roots and depth of Democrats' intransigence throughout the concurrent shutdown and debt limit crises. Party leaders have strictly enforced their "no negotiations" position, even when various factions were tempted to heed the will of the American people and negotiate a resolution:

Democrats’ message discipline needed some work. On Sept. 25, White House Chief of Staff Denis McDonough was alarmed when Chuck Todd of NBC News tweeted, “Number 2 Senate Dem Dick Durbin hints they might send bill back to House that includes some sweeteners for GOP to try and dial bk showdown.” Durbin had raised the prospect that the Senate might ultimately agree to a repeal of the health-care law’s unpopular medical-device tax, a move that 79 senators were on record as supporting. A White House official was dispatched to tell him it was too early for that kind of bargaining. Similarly, when the White House broached the possibility of inviting over the four top congressional leaders for a meeting with Obama in the week before the shutdown, Reid objected, arguing that it was premature for the president to engage.


It's as if the White House and Congressional Democrats acted as obstinacy accountability partners. When Durbin floated a possible bargaining chip that could have allowed Republicans a place to land, he was scolded by an Obama official "dispatched" to smack him down. When the president himself wanted to initiate discussions prior to shutdown, Harry Reid vetoed it, effectively overruling Obama. The Post report also notes that Nancy Pelosi has permitted dozens of House Democrats to vote with the GOP on a litany of common-sense piecemeal bills to restore funding to popular and essential elements of the federal government. She ran the political calculus and allowed certain members to break with the party in order to avoid being targeted with potent attack ads next year. She did so knowing that these fixes would be dead on arrival in the Senate. In short, the consistent theme of these machinations is ruthless partisanship. Democrats want the American people to believe that they're the responsible adults in the room, yet behind the scenes, they've undermined every opportunity for consensus. They've placed a political bet that Republicans' suffocating disunity and helpful media coverage would shift most of the blame onto the GOP -- and they appear to have been correct, even as they've taken their lumps, too. But those scrapes and bruises are worth it to them. The Obama/Reid/Pelosi triumvirate's overriding goal has never been to yield a compromise to end the standoff; it's been to get exactly what they wanted, and when that failed, to exploit the crisis to destroy the GOP.

As Kevin mentioned yesterday, Reid is now backpedaling on the Democrats lone supposed "concession" in all of this, namely, agreeing to continue funding at levels mandated by current law. Perhaps Reid believes that by eventually circling back to his initial offer (which was never a compromise in any meaningful sense), he will bamboozle people into thinking he's taken a conciliatory step toward the GOP position. In fact, he would have taken a step back, only to return to his original stance as a sham "accommodation." All one needs to know about Democrats' interest in negotiating a solution to this mess can be summed up in their treatment of Sen. Susan Collins' proposal. Collins is a moderate Republican from Maine who's been fashioning a deal that would have given the White House long-term, mostly clean extensions of both the temporary budget and the debt ceiling, while offering Republicans some widely-supported fig-leaf measures on Obamacare in return. After president reportedly signaled that he was "open to" the framework, Harry Reid unceremoniously killed it, leaving Collins frustrated and bewildered:


On Friday, it seemed that a proposal being spearheaded by Sen. Susan Collins (R-Maine) could potentially be the key that would relieve the fiscal crisis stymieing the Capitol. By Saturday, the plan fell flat on its face. Senate Democratic leaders rejected the approach that had been drafted by the moderate from Maine — although Collins’s plan had attracted interest from several Democratic senators eager to strike a bipartisan deal. That left Collins — who had been trying to play deal maker in recent days to save Congress from itself — perplexed by the swift Democratic rebuff. “I have bent over backwards to try to listen and accommodate and modify my plan,” Collins said...The frustration clearly boiled over on the Senate floor on the 12th day of the shutdown as Collins and Sen. Patty Murray (D-Wash.) engaged in a heated back-and-forth over the Democratic leaders’ rejection of Collins’s plan, according to several sources who witnessed the exchange. Murray, the No. 4 in Senate leadership, pointedly told Collins that it was unacceptable to lock in cuts at the sequestration spending levels. Collins scoffed at the Democratic position, arguing she had worked to find a solution that both sides could accept.


Reid's putative reason for nixing the Collins deal (which I view as deeply imperfect, but acceptable as a bare-minimum proposition, especially because some GOP demands have been totally unrealistic) was that it maintains current spending under the sequester as part of the Budget Control Act of 2011. The sequester was Obama's idea, and he signed the BCA into law. And yet:


Collins had been talking with a slew of Democratic and Republican senators on her proposal, which would extend government funding for six months and boost the debt ceiling through the end of January. But it also called for a two-year delay of a medical device tax in the health care law as well as an income verification requirement in order to qualify for Obamacare subsidies. Democrats were also not pleased with the amount of government funding in the Collins plan although it would give more flexibility to alleviate effects of the automatic budget cuts that have hit federal agencies. Indeed, top Senate Democrats made their distaste for the Collins plan clear early Saturday. Leaders privately began to encourage Democratic senators who were working with Collins to back away, arguing that it was a bad deal for their party in the high-stakes impasse with the GOP, several sources said. Their plea appeared to work — but it only infuriated Collins.


Go ahead and re-read what Collins' proposal would have entailed. It's a completely sensible and fair-minded package --bordering on a GOP give-away -- yet Reid instructed his members to stop cooperating with its author and pulled the plug. Democrats' position is so stubborn and unreasonable that they've managed to piss off a woman who may very well be the most moderate Republican in all of Congress. It appears as though the president and his closest Hill allies are willing -- if not eager -- to allow the partial federal shutdown to continue indefinitely in order to solidify their partisan advantage. Refuse to negotiate, blame Republicans, win. Will this cynical recklessness lead to a partial technical default? I suppose we'll find out sooner rather than later; October 17 is this Thursday. Democrats are hell-bent on "breaking" the Republican Party. Maybe they view deeply harming the nation's economy then pinning it on their opponents as the most efficient way to achieve that end. Because that's the way responsible adults behave. I'll leave you with two reminders: Though Republicans are clearly bearing the brunt of public anger right now, most Americans strongly agree with the GOP's position that genuine negotiations and compromise are necessary here, and believe that another no-strings-attached debt limit increase is unacceptable.


UPDATE - The Wall Street Journal confirms that Democrats have "escalated" the crisis by re-upping their demand to violate the BCA and increase federal spending.