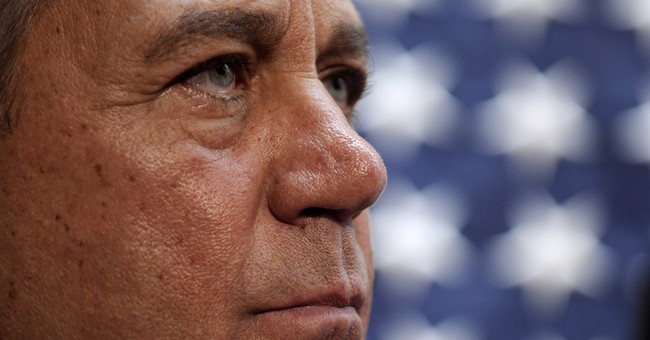 
Americans are finding little they like about President Barack Obama or either political party, according to a new poll that suggests the possibility of a “throw the bums out” mentality in next year’s midterm elections. The AP-GfK poll finds few people approve of the way the president is handling most major issues and most people say he’s not decisive, strong, honest, reasonable or inspiring. In the midst of the government shutdown and Washington gridlock, the president is faring much better than his party, with large majorities of those surveyed finding little positive to say about Democrats.


But as grisly as the picture is for Democrats, it's even uglier for Republicans:


The negatives are even higher for the Republicans across the board, with 4 out of 5 people describing the GOP as unlikeable and dishonest and not compassionate, refreshing, inspiring or innovative.


As an aside, a notable exception to the GOP implosion is the party's governors, but DC is in the spotlight right now. Boehner's pickle is revealed in even starker relief in the new NBC/WSJ poll, which is packed with awful news for Republicans. The "blame gap" between Obama and Republicans is expanding, and the ongoing dysfunction may actually be making Obamacare less unpopular (though it's still unpopular, with Americans taking an extremely dim view of the program's launch). So, at this stage, what are Republicans accomplishing? Earlier in the week, I explained why a short, quickly-resolved, relatively painless shutdown might have actually benefited conservatism's longer-term interests. That opportunity appears to be slipping away. A recent Gallup poll suggests that the American public -- which, ironically, is growing more conservative -- has become more alienated by the Republican Party than at any point over the last two decades. It's this toxic climate that helps explain why members on both sides of Capitol Hill seem to be moving toward face-saving resolutions that will inevitably enrage the base (even if the eventual agreements modestly advance several conservative goals). Charles Krauthammer describes how he'd draw up the imperfect contours of a path forward, while Megan McArdle makes a crucial point:


The shutdown is eclipsing the horrifyingly inept rollout of the federal exchanges. Republicans should be basking in schadenfreude while a grief-stricken administration watches its poll numbers plunge. Instead, Obama and his deputies are getting front-page stories every day where they get to claim to be the grown-ups in the room.


As some of us predicted, the halting, occasionally incoherent series of Republican CR demands have allowed Democrats to muddy the waters and distract from the unfolding Obamacare trainwreck, for which the president's clan is solely responsible. This quote from the Daily Mail's big Obamacare scoop speaks for itself: "Spokespersons for five different Democratic senators declined to provide comment, with most saying they are paying greater attention to the debt-ceiling and government-shutdown standoffs." No comment on their terrible policy failures, plenty of comment on the shutdown. Of course. Republicans need to (1) pick a strategy, (2) unite around a realistic "ask," and (3) message the hell out of it. Unfortunately, I'm not convinced that any of those necessary moves are feasible right now, with various center-right factions either pouncing on anyone who betrays the current definition of "purity," or viciously insulting those who believe they're standing on principle. Democrats' policies are hugely destructive and their tactics are often appalling. But as long as the Republican Party remains a hot, angry cauldron of internal sniping, it will be very challenging for its members to convince voters to restore them to power. And earning that power -- the privilege of majority governance -- is the only way to achieve many of the currently-implausible goals that would unite the movement. I'll leave you with what might be the best news of the past 24 hours: The single biggest impediment to both sides achieving a reasonable accommodation may finally have been cut out of the process. Bye, Harry.