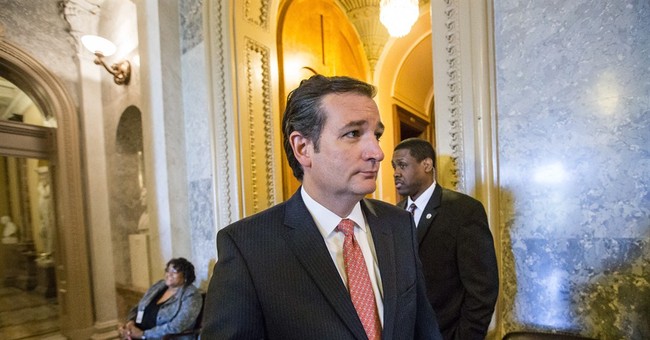 Here we go. As of 2:40pm ET, Cruz's marathon session is officially underway. Interesting politics all around. Party leaders on Capitol Hill recognize that Cruz's filibuster will fail, and quite a few Senate Republicans will, in fact, help ensure that outcome themselves. But so long as the junior Senator from Texas is engaged in an old-school talking filibuster, and slamming the president's unpopular healthcare law, the Republican National Committee will have his back. RNC sources tell Townhall that party chairman Reince Priebus has launched an online petition in support of Cruz's efforts, which will coincide with the Senator's talk-a-thon. Here is an exclusive look at the petition's verbiage:


SUBJECT: I stand with Ted [Friend], In a fight between Harry Reid and Ted Cruz, I will stand with Ted Cruz any day. Today, Senator Cruz has taken the fight to defund ObamaCare to the Senate floor. I hope you will join me in standing with him in solidarity. As Republicans, we must remain true to our principles and fight to protect the American people from this reckless law. 55% of Americans disapprove of the manner in which ObamaCare is being implemented, yet Harry Reid and Senate Democrats continue to defend it, even at the expense of keeping the government running. Harry Reid may think ObamaCare “has been wonderful for America.” But the facts are on our side – ObamaCare is costing Americans higher taxes, fewer jobs, and less access to care. Join me and stand with Ted today. Sign our pledge and tell Harry Reid to defund ObamaCare immediately! - Reince Priebus


This push doesn't represent a bear-hug of Cruz's controversial strategy, but it does present the GOP establishment with an opportunity to embrace Cruz, and the principle of opposing Obamacare -- a uniting issue on the center-right. I haven't been bashful about offering critical analysis of Cruz's specific "defund" plan. (See Thomas Sowell for some additional salient points). But even if one concurs with Mitch McConnell's circumspect approach on this tactical matter, one can still applaud Cruz for giving voice to the conservative base, doing his part to "stand and fight," and forcing a conversation on Obamacare that Democrats would prefer to sweep under the rug. Conservatives-in-good-standing who believe Cruz's filibuster ought to be ultimately defeated can simultaneously "stand with Ted" as he presses his case on the Senate floor. His staunch opposition to the so-called "Affordable" Care Act is a rallying point for all conservatives, regardless of whether they concur with his particular tactics. And Conservatives-in-good-standing who back Cruz's play to the hilt are going to love what they see over the next several hours.

ProTip: @SenTedCruz floor speech is not a filibuster. Procedural motion tomorrow morning is fixed. He can't delay it or stop it.