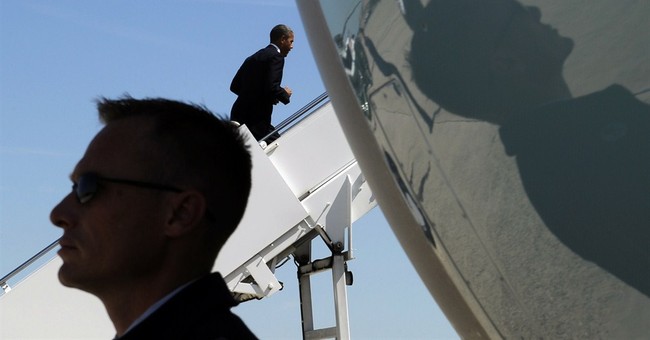 When President Obama arrived in Chattanooga, Tennessee earlier this week to deliver his warmed-over, largely ignored "grand bargain" speech to a partisan audience, he was welcomed to town by a scorching editorial from the Chattanooga Times Free Press.  Entitled, "Take Your Jobs Plan and Shove It, Mr. President," the piece was unsparing it its criticism of the administration's failed policies:

Welcome to Chattanooga, one of hundreds of cities throughout this great nation struggling to succeed in spite of your foolish policies that limit job creation, stifle economic growth and suffocate the entrepreneurial spirit. Forgive us if you are not greeted with the same level of Southern hospitality that our area usually bestows on its distinguished guests. You see, we understand you are in town to share your umpteenth different job creation plan during your time in office. If it works as well as your other job creation programs, then thanks, but no thanks. We’d prefer you keep it to yourself. That’s because your jobs creation plans so far have included a ridiculous government spending spree and punitive tax increase on job creators that were passed, as well as a minimum wage increase that, thankfully, was not.

Now the editor who penned the caustic condemnation linked 'round the blogosphere has been fired, supposedly for violating editorial guidelines in changing the original headline (via Howard Kurtz):


The editorial page editor of a Chattanooga newspaper has become, as he tweeted today, “the first person in the history of newspapers to be fired for writing a paper’s most-read article.”  The problem was not the anti-Obama editorial itself. It was the headline: “Take your jobs plan and shove it, Mr. President: Your policies have harmed Chattanooga enough.” ... The Chattanooga Times Free Press says that Drew Johnson got the boot, after just 14 months on the job, for adding the headline “outside of normal editing procedures.” The editorial appeared on Tuesday, the day that Obama visited the Tennessee town. The Times Free Press says that “the headline was inappropriate for this newspaper. It was not the original headline approved for publication, and Johnson violated the normal editing process when he changed the headline. The newspaper’s decision to terminate Johnson had nothing to do with the content of the editorial, which criticized the president’s job creation ideas and Chattanooga’s Smart Grid...On his Twitter feed, Johnson said that “any time the paper wanted to change the headline online (which is how most people read the editorial), they could've.” He added: “We change headlines all the time at the last minute. I had a filler headline in that stunk and thought of that Johnny Paycheck song.”


Every story has two sides, but it seems as though the -- ahem -- Free Press overreacted by firing Johnson. One can make the case that his last-minute headline was too vituperative and disrespectful to the president, but was it a firing offense?  Debatable, at best.  Regardless, I suspect Johnson won't be out of a job for long.
Biden and Cabinet Go Abroad While Americans Face Crises at Home
Spencer Brown
Courage: NBA Player Intensifies Criticism of China, Calls Out Nike and LeBron
Guy Benson
'Manchin and Sinema Are Caving': Senate Dems in Agreement Over New Proposal to Help Fund Spending Bill
Leah Barkoukis
There's Been a Massive 'Censorship Fail' of Banned 'Let's Go Brandon' Song
Leah Barkoukis
Did You Catch What Was Very Wrong with Rolling Stone's Piece About the January 6 Riot?
Matt Vespa
Biden Relitigates 2020 as He Stumps for McAuliffe Yet Again in Virginia One Week Before Election
Rebecca Downs
CARTOONS | Gary Varvel
View Cartoon
Most Popular