Obama: Meh, the Keystone Pipeline Might Only Create 50 Jobs 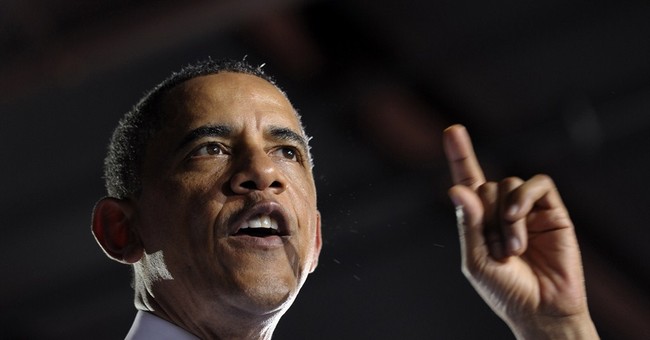 Fifty permanent jobs, that is -- but he really lowballs the overall estimate, too.  Over to you, President Chuckles (scroll ahead to the 1:10 mark):


Laughing off the wildly popular Keystone project is a deliberate White House messaging strategy, it seems.  Here he is laughing through another discussion of it with the New York Times:


MR. OBAMA: Well, first of all, Michael, Republicans have said that this would be a big jobs generator. There is no evidence that that’s true. And my hope would be that any reporter who is looking at the facts would take the time to confirm that the most realistic estimates are this might create maybe 2,000 jobs during the construction of the pipeline -- which might take a year or two -- and then after that we’re talking about somewhere between 50 and 100 [chuckles] jobs in a economy of 150 million working people.

NYT: Yet there are a number of unions who want you to approve this. MR.

OBAMA: Well, look, they might like to see 2,000 jobs initially. But that is a blip relative to the need.


Quite the cavalier attitude from a president who's in the middle of a potemkin "jobs" tour, with the national U-6 unemployment rate hovering above 14 percent.  Discounting 2,000 American jobs as a "blip" might strike many unemployed Americans as an odd formulation.  Beyond that, he's wrong on the numbers, ignoring the dramatically more optimistic findings of his own State Department.  The Washington Post's fact-checker lays out the stats, awarding Obama "two Pinocchios" for his misleading characterization:

Here’s the president, tossing out a rather low figure (“maybe 2,000” during the construction phase) and then chuckling that it would only be “50 to 100 jobs” after that. When we had looked at this before, we concluded that all such estimates are subject to guesswork, but the most mainstream estimate appeared to come from the State Department — 5,000 to 6,000 construction jobs per year. Interestingly TransCanada, which would build the pipeline, had a very similar estimate for the two-year project — 13,000 jobs, or 6,500 per year...The State Department also says the project could “potentially support approximately 42,100 average annual jobs across the United States over a one-to-two-year period.”  State said the employment would translate into about $2 billion in workers’ earnings, $3.3 billion in construction and materials costs and $67 million in state and local taxes. That sounds like real money and quite a few jobs, at least in the short term.

"But the permanent jobs estimates are much lower," extremist Keystone opponents complain.  Okay.  Are we willing to turn up our noses at a major infrastructure project, and the thousands -- if not tens of thousands -- of jobs it would create and sustain over several years just because the completed project would eventually require far fewer permanent positions?  And since when did this administration oppose part-time or non-permanent work?  Obama's policies are making those options a way of life for too many Americans.  "But think of the environmental destruction!" they wail.  Wrong again.  These issues have been studied for years, and the State Department's environmental impact survey concluded that Keystone construction would have "minimal"  repercussions on the environment -- this after previous concerns were dealt with.  Critics' biggest problem with the pipeline is that the project will generate significant carbon emissions.  Two things: (1) Canada is going to build a pipeline somewhere, and that oil is headed abroad, so the resulting carbon emissions are going to enter the atmosphere one way or the other.  Do we want a big piece of the employment and energy action or not?  (2) Global carbon emissions have soared to all-time highs over the last 15 years, even as warming has flat-lined.  The Economist, whose editorial bent on climate change has been rather alarmist over the years, recently noted that major climate models' warming projections have not matched reality: 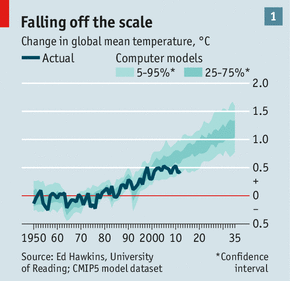 Is the Left willing to sacrifice thousands of jobs and economic development at the altar of unsettled science?  Perhaps the president could answer these questions if he's willing to take a break from sneering and chortling.