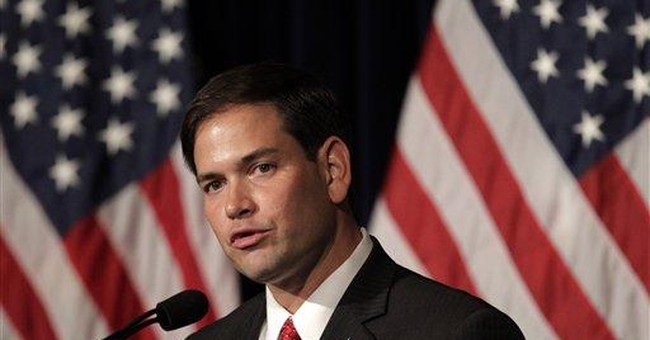 Within minutes of the president's 58,000th Obamacare speech yesterday, Marco Rubio fired back on the Senate floor.  Whereas Obama was characteristically petulant, arrogant and acutely political (while scolding others for playing politics, of course), Rubio used his speech to highlight the plight facing a medium-sized business in Florida.  Because of the "Affordable" Care Act, they'll either have to drive away customers by raising their prices, shed employees, push people into part-time work, or drop coverage altogether and pay a tax once the mandate goes into effect.  Rubio acknowledged that the pre-Obamacare American healthcare system needed to be improved for many people, but excoriated the new law as a failed experiment that is hurting Americans.  Compared to the president, Rubio's approach was notably more practical and less partisan:

Incredibly, Obama is still repeating his "you can keep your plan" fable, even in the face of all evidence and reality.  Congratulations to America's smug "reality based community."  The newsworthy bit of the Florida Senator's remarks was his vow to vote against any budget deal -- for instance, when the debt ceiling issue re-emerges -- that continues to fund a healthcare law that is falling apart.  To the surprise of no one, the president is stretching the truth and outright prevaricating about his signature accomplishment.  As Katie wrote earlier, the Associated Press dinged him for exaggerating the impact and scope insurance rebates.  They also fact-checked his whirlwind of blame for some of the law's failures.  For instance, he's fingered Obamacare opponents for complicating the process of "establishing affordable insurance markets."  The AP points out that logistical problems are arising even in liberal states that want to help promote the law.  And as for states governed by leaders who oppose Obamacare, Democrats paved the way for this perfectly legal resistance by (a) writing in an unconstitutional provision requiring states to expand Medicaid that was struck down 7-2 by SCOTUS, and (b) giving states the option to turn exchange-creation duties over to the federal government.  The federal government wasn't ready for that task -- which isn't Republicans' fault.  If anything, it's yet another example of why a massive, bureaucratic and often incompetent federal government shouldn't have overhauled the entire healthcare system in such a wrong-headed and partisan manner.  Obama himself has already unilaterally delayed three major elements of his own law -- while insisting that everything's going swimmingly.  If nonpartisan experts are to be believed, another humiliating postponement may be in the works:

Two U.S. government officials warned on Wednesday that the launch of new state healthcare exchanges could potentially be delayed, raising further doubts about the implementation of President Barack Obama's signature legislation. Alan Duncan, an auditor with the Treasury Inspector General for Tax Administration, an Internal Revenue Service agency that monitors performance, said testing the systems needed to implement the exchanges "will be difficult to complete" by the October 1 start date. "The lack of adequate testing could result in significant delays and errors in accepting and processing ... applications for health insurance coverage," he told the House of Representatives Oversight and Government Reform committee.


Meanwhile, the law remains unpopular, small businesses are bracing for its adverse impact, some skittish Democrats are siding with Republicans on additional delay efforts.  In the face of mounting suspensions, snags, and headaches, Obama gives an acerbic speech, HHS releases a propaganda ad packed with falsehoods, and the former DNC communications director sums up his side's anti-evidence, crude, twilight zone conclusion in one tweet:


Classy.  Then again, I'd still prefer that to this.


UPDATE - Obamacare premium shock hits Indiana, where the vast majority of residents are happy with their coverage.  Even state employees have embraced their cost-saving, free-market universal system, "Hoosiercare."