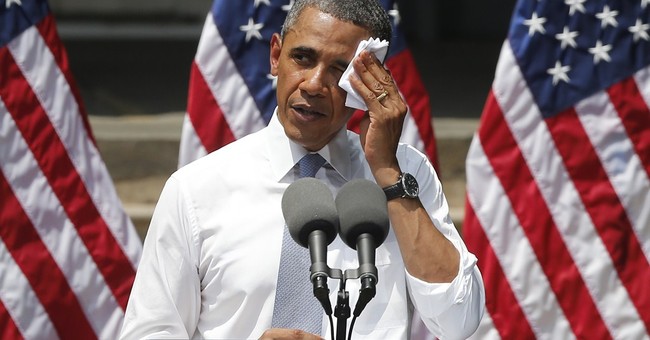 Flattened for good?  Probably not.  But the ongoing, slow-motion train wreck known as "Obamacare implementation" has dealt a body blow to Washington's latest massive undertaking.  Here's Chuck Todd on Sunday's Meet the Press:

“Let me tell you something else, David.  The White House had been so confident that they were going to sign immigration reform this year. But for the first time I am hearing that there is some doubt seeping in, that they think that maybe the House won’t act … The problem is there’s no trigger at the end of this year. … So I don’t know how this happens by the end of this year and suddenly now the White House doesn’t see a path to how this happens.”


What changed?  First off, there's been the intense grassroots backlash against guys like Marco Rubio.  Many House Republicans want no part of that.  Then there's the updated CBO score of the Senate-passed bill, which projected that for all the many billions in new resources, the border enforcement mechanisms would only stem the tide of illegal crossings by 33 to 50 percent.  Add these new millions to the millions of illegal immigrants already here who won't qualify for legalization, and you've got yourself a brand new "permanent underclass."  Even supporters of reform like yours truly can't stomach a comprehensive solution ostensibly designed to tackle this problem "once and for all" when it will do nothing of the sort as currently constituted.  Finally, we have the ever-present trust deficit.  Americans -- especially conservatives -- simply do not trust the federal government to accomplish massive and complex projects with an adequate degree of competence or accountability.  Enter Obamacare.  That enormous and costly nascent government program has already reached a seminal moment of reckoning.  Facing a growing insurrection from businesses over the employer mandate's deleterious effects on hiring, the White House has bowed to economic reality by delaying a (second) significant Obamacare provision.  This decision has ramifications beyond the employer mandate, of course, which is why healthcare analysts are on the "unintended consequences" lookout.  But buried in the weekend news dump was another jaw-dropper -- the "honor system" subsidy-allocation farce, which Kevin covered here.  The Wall Street Journal explains why this additional punt represents another discrete and gargantuan Obamacare failure:


HHS now says it will no longer attempt to verify individual eligibility for insurance subsidies and instead will rely on self-reporting, with minimal efforts to verify if the information consumers provide is accurate...HHS calls this "a slight technical correction" though it is much more than that. The exchanges will not only start dispensing benefits "based on an applicant's attestation" about his employment insurance status. HHS is also handing the exchanges "temporarily expanded discretion to accept an attestation of projected annual household income without further verification." In other words, anyone can receive subsidies tied to income without judging the income they declare against the income data the Internal Revenue Service collects. This change has nothing to do with the employer mandate, even tangentially. HHS is disowning eligibility quality control because pre-clearance is "not feasible" as a result of "operational barriers" and "a large amount of systems development on both the state and federal side, which cannot occur in time for October 1, 2013."

In other words, the employer mandate explains part of the coming verification-free subsidy bonanza, but not all of it.  The income-related "pre-clearance" system -- aka, the much-balleyhooed 'Expedia-style' exchange that will instantaneously determine someone's eligibility for taxpayer subsidies -- "cannot occur in time" to meet the law's deadline.  Rather than suffer another black eye by delaying a third huge piece of the law, the administration is ditching crucial operational safeguards in favor of handing out taxpayer subsidies like candy -- and hoping everyone is totally above-board about it.  We've been predicting for months that many of the exchanges wouldn't be ready for action once the Obamacare curtain went up.  I guess it follows that the administration would broom the "cost-saving" measures (many Democrats have started abandoning the "affordable" part of the Affordable Care Act) in an effort to get as much money out the door as quickly as possible, in order to let the dependency take root.  But what does any of this have to do with immigration reform?  Well, aside from the fact that President Obama's signature "reform" is splattered all over a brick wall of federal incompetence and missed deadlines?

Two words: Executive discretion.  Well-meaning actors like Rubio insist that the Senate bill ties the administration's hands and forces them to satisfy certain requirements that they would never abide otherwise.  Even if DHS and other officials have technically been stripped of fairly wide-ranging authority, who's to say that the Obama administration will enforce any "draconian" elements of a hypothetical immigration law?  Think of it this way: Obamacare is 100% their baby; written by Democrats without Republican input, passed by Congressional Democrats without any Republican votes, and signed into law by the Democrat-in-chief.  Even so, the president is unilaterally postponing and ignoring substantial sections of his own signature law.  He's doing so both for political reasons and because implementation is a genuine debacle, but the "why" isn't important in this context.  The Obama administration has decided it can disregard mandatory, clearly-written privisions of a law it likes.  Many Americans and their representatives in the House are left wondering why this administration should be trusted to faithfully execute elements of any immigration law they might oppose -- especially when the president already conspicuously ceased enforcement of an existing immigration law in a transparent election-year pander.  To say nothing of other brazen acts of ideology-driven lawlessness.  Sweeping immigration reforms may not be down for the count, but in a delicious twist, it looks as though one Obama legacy project (Obamacare) is undercutting another (immigration reform) with each passing day.  I'll leave you with the president offering a stirring ode to the wonders of government effectiveness (!) including this immortal line:

"We all have a stake in government’s success, because the government is us, and we’re doing things right."

That was yesterday.  Now go back and re-read this, and this.
UPDATE - A salient question from Paul Ryan: How much will Obama's on-the-fly revisions of Obamacare end up costing?  They weren't included in the CBO's original, garbage-in-garbage-out score.