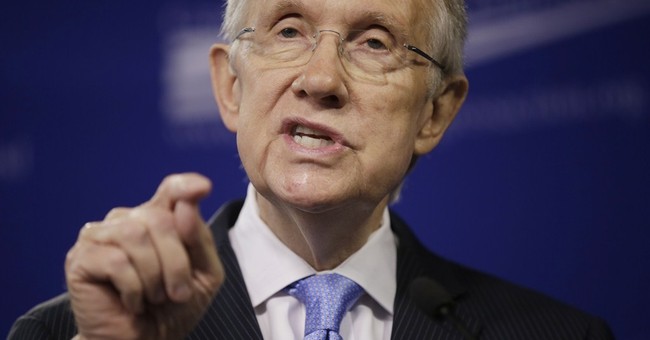 My friend and eminent healthcare policy expert Avik Roy's work is typically brilliant and indispensable -- which is why I was intrigued when I saw him tweet out a column he'd written back in February arguing that conservatives should root for Harry Reid to succeed in nuking the Senate filibuster.  Republicans, he says, will sooner or later benefit from the new order; a future GOP-controlled upper chamber will be empowered to pass important reforms through simple majority votes, without a noisy and hard-headed Democratic minority derailing their efforts.  The crux of his case:

It is a matter of equal, if not greater, importance that Republican attempts at entitlement reform have been thwarted by the filibuster. In 2005, George W. Bush proposed a far-reaching plan to put Social Security on a permanently stable financial footing. It was scotched, because of united opposition from minority Democrats. Bush’s 2003 bill to add prescription-drug coverage to Medicare originally contained a Paul Ryan–style “premium support” plan to reform the rest of Medicare. That provision was dropped because Democrats would have filibustered it. It has been 104 years since the Republican Party controlled 60 seats in the Senate. In that span, the Democrats have controlled 60 seats in twelve different Congresses: from 1935 to 1943, 1959 to 1969, 1975 to 1979, and 2009 to 2010.

While political alignments and filibuster thresholds have changed, only Democrats have achieved the supermajorities needed to transform the country, through programs like the New Deal and the Great Society, with no comparable legislation in the other direction from Republicans. When it comes to domestic policy, conservatives have two goals above all others: put the country back on the road to solvency, and restore constitutional conservatism to the Supreme Court. Republicans will never achieve either unless they go along with Democratic efforts to eliminate the filibuster. Instead of worrying about their influence over the next two years, GOP senators ought to keep their eyes on the long-term prize.

Roy's premise seems to rest on the assumption that once a single variety of the filibuster is abolished, it's only a matter of time before the entire mechanism meets its demise. (Reid currently says his plan would only apply to executive nominees, excluding judges).  I think he's right on this point.  Once the underlying taboo against tinkering with the filibuster is breached, the next steps become inevitable.  He also submits that future Republican presidents will enjoy this rule change, as they'll be liberated to appoint unambiguously conservative judges and cabinet members without the fear of 41 or more Democrats standing in the way of confirmation.  Roy makes some compelling points, but there's another, unsettling side to this equation.  To seize on one example he raises, a simple majority of Democrats almost certainly could have passed an even worse version of Obamacare in 2010.  With Republicans powerless to stop anything in the Senate at the time, moderation and trepidation within Democratic ranks forced party leadership to water down the bill.  Remember, Nancy Pelosi's House had already rubber-stamped the more extreme version.  Without the threat of a filibuster, the "public option" would have become law, greasing the skids for a single-payer, government-run system after the private sector collapsed.  In addition, Cap and Trade would probably be the law of the land, as would Card Check.  Yes, Miguel Estrada would be sitting on the federal bench today, but so would Goodwin Liu, and any number of far-left judges.  As much as conservatives weren't fans of President Obama's Supreme Court appointments, a simple-majority Senate would undoubtedly have produced significantly more radical nominees from this president.  Roy also notes that historically, Democrats have fared better in Congressional elections than Republicans.  Indeed, since 1945, just two Congresses (2003-2007) have been controlled by the GOP while a Republican occupied the Oval Office.  Democrats have enjoyed single-party rule eleven times during the same stretch.

Ideologues on both sides of the spectrum must ask themselves whether one wave election entitles the wave-riding party carte blanche power to do what it pleases.  Will all the political scientists complaining about "gridlock" today become fixated on the "tyranny of the majority" tomorrow?  (As soon as Republicans win, that is).  And if you think the current partisan climate is too acrimonious and polarized, imagine how things will look when supporters of the losing party -- no matter how narrow its margin of defeat -- perceive that they have absolutely no voice in Washington?  Will that prevailing sense serve to heal oft-lamented "broken" politics?  Non-ideologues must ask themselves whether simple-majority rule in both houses of Congress will generate wise and desirable policy decisions.  They must also consider whether they're comfortable with forever defining down the Senate's "advise and consent" role, while re-imagining our system of checks and balances.  Finally, reflexive partisans must remind themselves that no majority lasts forever.

Reid has set the stage to detonate the nuclear option tomorrow morning.  As Senators prepare for a closed-door, last-ditch conclave to hash out these issues this evening, the Washington Post wonders whether Reid is bluffing.  Their sources say no.  Sen. John McCain (an original 'gang of 14' member) is seeking a last-minute compromise to preserve the filibuster.  Will an eleventh-hour compact be reached, or will Reid violate his promise and "break the rules to change the rules"?  If he does, how will the media react?  We'll know soon enough.

UPDATE - As I was saying about inevitability...here's a quote from Harry Reid earlier today (via Mitch McConnell's office):

“I mean, you could look at many different pieces of legislation and look at how the 60-vote threshold, whether 60 could be changed to a lower number -- that is something that we can deal with later.”