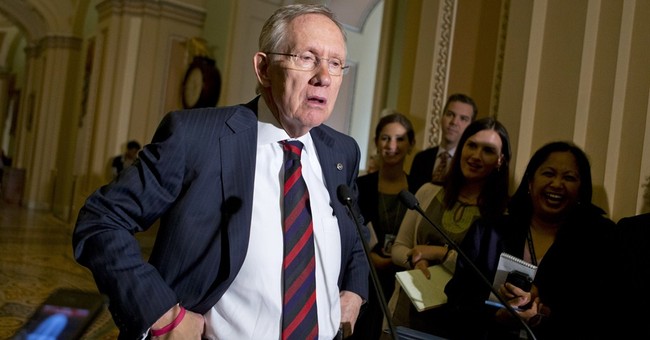 I get it.  Skirmishes over Senate parliamentary procedure are numbingly boring and arcane to most people.  But please stay with me on this -- it's really important.  We knew this debate was coming in July, and here it is.  With an explicit blessing from the White House, Senate Majority Leader Harry Reid has signaled that he and his fellow Democrats are preparing to execute the unprecedented power grab of changing the Senate rules to limit the minority's long-standing filibuster rights:

A confrontation in the Senate between Republicans and Democrats over the confirmation of President Obama’s cabinet nominees edged closer on Thursday toward a showdown over changing the rules on filibusters. After a tense exchange on the floor with his Republican counterpart, Senator Harry Reid of Nevada, the majority leader, planned to recommend to his fellow Democrats at a private lunch meeting that they should vote to take the exceptional step of barring the minority party from filibustering presidential appointees. The step that Mr. Reid will endorse, which drew strong objections from Senator Mitch McConnell of Kentucky, the Republican leader, would not affect filibusters of legislation or judicial nominees. But it would prevent Republicans from being able to require a supermajority of 60 votes for the confirmation of people the president appoints to cabinet level posts or other executive-branch positions. Republicans and Democrats have been searching for a way to avert the rule change, which is so controversial that it is nicknamed “the nuclear option.” Any altering of the long-held Senate custom of the filibuster is a rare and, some argue, perilous as one year’s majority party could be the next year’s minority. Senators in both parties also say they fear it could irrevocably change the nature of the Senate.

Republicans offered to allow votes on several highly controversial Obama nominees (a mistake, in my view -- particularly on radical Thomas Perez) to head off a "nuclear" detonation.  Democrats rejected the compromise:

Mr. McConnell and his fellow Senate Republicans have signaled in recent days that they were willing to relent on some nominees that remain held up, including Gina McCarthy to be director of the Environmental Protection Agency and Thomas E. Perez to be secretary of labor. But Mr. Reid and Democratic leaders have rejected that compromise as unsatisfactory, aides said. Several other nominees remain in a Republican holding pattern, including ones to lead the Consumer Financial Protection Bureau and the National Labor Relations Board, which is of considerable importance to the labor unions that are so crucial to the Democratic Party.

One small detail: Republicans continue to hold up votes on these three nominees because President Obama illegally installed them through illegitimate "recess" appointments when Congress was not in recess.  Two federal courts have ruled that these appointments were, in fact, unconstitutional. Reid is apparently willing to blow up decades of Senate precedent and comity in order to ramrod three illegally-installed nominees through the Senate.  Liberals hope this action will retroactively "legitimize" a series of decisions carried out by the NLRB's currently-illegitimate quorum.  Big Labor salivates.  If he pulls the trigger on this, Reid would not only break his on-the-record, unambiguous promise to the Senate in 2011, he would also execute a ploy that he deemed "un-American" when the shoe was on the other foot.  Here is a parade of Senate Democrats angrily denouncing a(n abandoned) Republican proposal to enact a similar rule change in 2005.  Seriously, watch the whole thing, even if you've seen it before:


The 'Gang of 14' compromise ultimately prevailed in '05, thus averting the "Constitutional crisis" Chuck Schumer warned about.  It has held ever since.  Today, Republican Leader Mitch McConnell angrily sparred with Reid over the revived nuclear threat in a series of terse and increasingly personal exchanges on the Senate floor.  Reid maintained that following a planned Senate meeting on Monday night (at which Republicans will plead with their Democratic colleagues not to follow through), he will call for cloture votes on all of the stymied nominees.  Those will come Tuesday morning.  If Republicans proceed to block any of them, Reid has indicated that he will -- in his words -- "break the rules to change the rules."

Consider the lawlessness and arrogance at play here: During the Bush years, Senate Democrats pioneered a series of obstructionist tactics to prevent the president from making controversial recess appointments.  When the White House changed hands, Republicans turned the tables and used the Democrat-invented moves to thwart a handful of Obama's potential "recess" appointments.  Frustrated by being hoisted by his own party's petard, Obama decided to decree that Congress really was in recess, even though they legally were not.  He made the appointments anyway.  Republicans Affected businesses sued, and two federal judges have agreed that Obama acted unlawfully.  Determined to get their way, petulant Democrats are now preparing to break the Senate's rules to protect these bogus appointees.  If they make good on this threat, Senate Republicans are promising to retaliate by grinding the upper chamber to a completely dysfunctional halt; another testament to Harry Reid's disgraceful "leadership."  His justification in all of this, of course, is to blame Republicans.  Because they've blocked some Obama nominees, they're dirty obstructionists who've brought this on themselves via "unprecedented" intransigence.  Set aside the fact that Reid quarterbacked demonstrably worse obstructionism under Bush and consider the actual record:

“Since this President first took office, the Senate has confirmed 1,560 people — 1,560. The Senate has confirmed every single one of the Cabinet nominees that has been brought up for a vote this year — every single one. The President has gotten nearly three times as many judges confirmed at this point in his second term as President Bush. Here's the point. What this whole so-called crisis boils down to — what it all comes down to — are three nominees that the President unlawfully appointed, as confirmed by the courts. And one of those nominees had been held up by inaction over at the White House related to structural reforms that the Administration – and even the nominee himself – now say they are willing to work with us on. The fact is, we’ve been confirming lawfully nominated folks routinely and consistently."


Confronted with these facts earlier today, Reid said that he's not interested in getting bogged down in statistics.  Indeed, a senior Democratic aide recently told Politico that the facts are "irrelevant."  They're going to do what they damn well please, even if it means violating tradition, precedent, the Senate rules, their own previously- and passionately-held positions, and their word.  The legislative mushroom cloud may rise over the Capitol on Tuesday.  Stay tuned.