The US Supreme Court has struck down the Defense of Marriage Act as unconstitutional in a 5-4 ruling, authored by Justice Kennedy. Chief Justice Roberts dissented, as did Justices Scalia, Thomas and Alito. The Court's rationale, per SCOTUS blog: "DOMA is unconstitutional as a deprivation of the equal liberty of persons that is protected by the Fifth Amendment." The Defense of Marriage Act was passed overwhelmingly by Congress and signed by President Clinton in 1996. Here is the text of the landmark Windsor decision.

While the federal portion of DOMA has been tossed out (the federal government must now recognize same-sex marriages performed in states that allow the practice), it appears that the high court has not required states to recognize same sex unions from other states. In Chief Justice Roberts' dissent, he hints that the Court will dismiss the Proposition 8 gay marriage case from California, based on standing issues. That decision, Hollingsworth v Perry, will be released in a few minutes. So it looks like the Court has given gay rights proponents a significant win on DOMA, while preserving some level of respect for federalism on the issue, and has not handed down a sweeping ruling on gay marriage. We'll have to wait to see Perry to know for sure, but it doesn't sound like the Court has established a right to marriage for same-sex couples. Here are the key grafs from Kennedy's majority opinion: 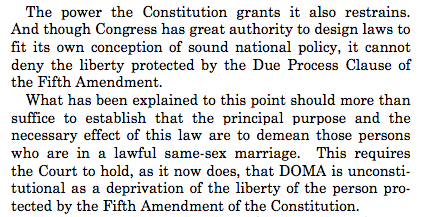 UPDATE - The Court, in a 5-4 decision, has declined to rule on the constitutionality of Prop. 8, California's 2008 amendment limiting marriage to one man and one woman. The decision, authored by Roberts, is a procedural one. Quote: " The Ninth Circuit was without jurisdiciton to consider the appeal. The judgment of the Ninth Circuit is vacated, and the case is remanded with instructions to dismiss the appeal for lack of jurisdiction." This is effectively a punt. The Court neither affirmed nor stuck down Prop. 8 -- thus, no major precedent is set. Because the most recent lower court decision tossed out Prop 8, same-sex marriages are likely to resume in California for the time being. The 5-4 coalition is an unusual one: The majority features Roberts, Scalia, Ginsburg, Breyer and Kagan. Dissenters are Alito, Thomas, Sotomayor and Kennedy.


UPDATE II - Kennedy, who wrote the Court's Windsor opinion invalidating DOMA, dissents on Prop. 8, arguing that the Supreme Court has avoided addressing a crucial principle of democracy: The will of the people.

In the end, what the Court fails to grasp or accept is the basic premise of the initiative process. And it is this. The essence of democracy is that the right to make law rests in the people and flows to the government, not the other way around. Freedom resides first in the people without need of a grant from government. The California initiative process embodies these principles and has done so for over a century.


Public opinion has shifted in a big way since 2008, and one might imagine that Prop. 8 would fail in California if it were held today. But Kennedy believes that the clearly defined will of a majority of Californians five years ago deserves a real hearing in court. The bottom line of today's dual rulings: The debate over gay marriage will continue in the states, which is where many federalists believe it belongs.