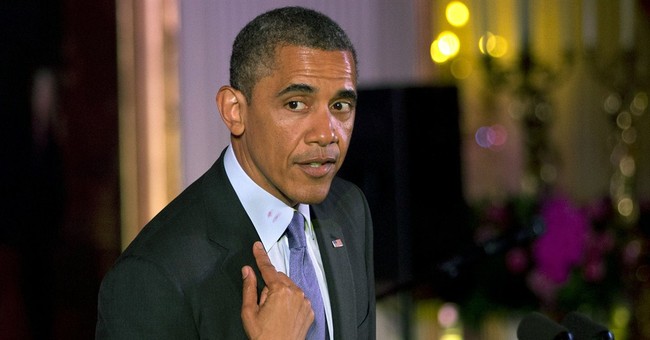 Independent confirmation of a trend we spotted last week:

President Barack Obama gets a negative 45 – 49 percent job approval rating, compared to 48 – 45 percent positive in a May 1 survey by the independent Quinnipiac (KWIN-uh-pe-ack) University, conducted before the IRS allegations surfaced.  The president’s biggest drop is among independent voters, who give him a negative 37 – 57 percent score, compared to a negative 42 – 48 percent May 1. He gets a negative 9 – 86 percent from Republicans and a positive 87 – 8 percent from Democrats, both virtually unchanged. Women approve 49 – 45 percent while men give a negative 40 – 54 percent score...Americans are divided 49 – 47 percent on whether Obama is honest and trustworthy, down from 58 – 37 percent, the last time Quinnipiac University asked the question September 1, 2011.

The president has been battered by a three point drop in overall approval, a four point uptick in disapproval, cratering numbers among independents, and a whopping 19-point swing on trustworthiness.  The scandals are taking their toll on this White House.  As Katie noted earlier, overwhelming majorities now support the appointment of a special prosecutor to look into the matter -- which, if nothing else, demonstrates a prevailing sense of "this is important."  (The DNC might want to retool its messaging accordingly).  While the public attention and seriousness is welcome, I again commend to you this Wall Street Journal editorial, which makes a persuasive case against a special counsel:

The case for a special counsel is that Attorney General Eric Holder can't be trusted to investigate his Administration, and that the Administration will stonewall Congress. We don't trust Mr. Holder either, but letting him pass the buck to a special prosecutor is doing him a favor. This scandal is best handled in Congressional hearings that educate the public in the next year rather than wait two or three years for potential indictments. No fewer than three Congressional committees are digging into the facts, and they have the power to issue subpoenas, compel depositions and demand emails and documents. All of this can then make its way into the public record. If the White House chooses not to turn over relevant information, it will have to assert executive privilege. Such resistance carries its own political price.

With a special prosecutor, the probe would immediately move to the shadows, and the Administration and the IRS would use it as an excuse to limit its cooperation with Congress. Special prosecutors aren't famous for their speed, and a decision on indictments would extend well past the 2014 election. If there were no indictments, whatever the prosecutor has discovered would stay secret. And even if specific criminal charges were filed, the facts of an indictment couldn't stray far from the four corners of the violated statute. Beyond proving his specific case in court, a special prosecutor will not be as concerned with the larger public policy consequences and political accountability. That accounting should include how this started, what IRS officials thought they were doing, how far the knowledge and genesis went up the chain of government command, or what pressure was brought to bear on those supposed "rogues" in Cincinnati.

Whether the IRS targeting will ever seep into the Oval Office remains to be seen.  In one important sense, it's immaterial (not to be confused with "the law is irrelevant").  The IRS' politicized behavior and subsequent stonewalling is, at the very least, glaring evidence of a bloated, out-of-control, unaccountable federal government that abused its citizens for years with virtual impunity.  The IRS' go-to excuses of "bad management" and "horrible customer service" are just as damaging to the cause of Big Government as proof of malice and deceit.  In the best case scenario, vast swaths of the government are unwieldy, badly run, unintentionally abusive, and answerable to no one.  Again, that's the best case scenario.  As the investigations continue, I suspect a lot of Americans will have questions about the DC report Katie referenced in her post.  Former IRS Commissioner Douglas Shulman visited the White House three times as often as his boss, Treasury Secretary Tim Geithner, during Obama's first term.  Think about that. To put that figure in perspective, the previous IRS commissioner visited 1600 Pennsylvania Avenue... exactly once in four years, during the Bush administration.  Shulman was there 157 times under Obama.  Why?