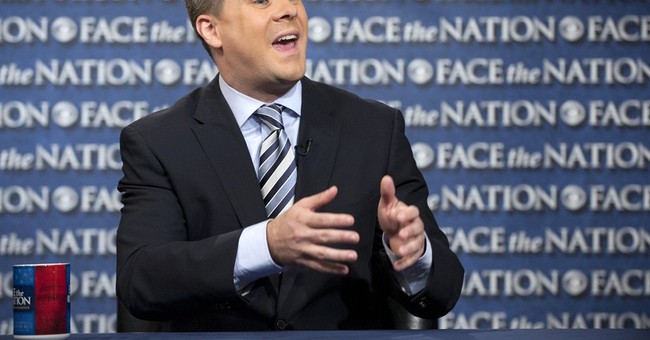 Dan Pfeiffer evidently drew the short straw at the White House over the weekend.  He was thrust into the unenviable role of top administration mouthpiece on the Sunday morning chat shows, with scandal sharks circling.  The RNC notices that one of Pfeiffer's go-to maneuvers to avoid a question he didn't like was to dismiss it as "irrelevant."  CBS News' Bob Schieffer asked Pfeiffer about the White House's pattern of deploying spokespeople who aren't equipped to discuss specifics on Benghazi.  Amb. Susan Rice -- who knew next to nothing about the Benghazi attacks before she was sent out to publicly recite false talking points -- comes to mind, of course, but Schieffer also had someone else in mind.  "Why didn't the White House Chief of Staff come out, and I mean this as no disrespect to you, why are you here today? Why isn't the White House Chief of Staff here to tell us what happened?” he asked.  Ouch.  Pfeiffer's response was weak:


Actually, we know who was primarily responsible for scrubbing the talking points (the State Department) and why (to mitigate political embarrassment for their lethal failures).  And assigning responsibility for misleading the public isn't "irrelevant," Dan.  While we're at it, no, Rice's rendition of events wasn't based on the "best information" the intelligence community produced.  Their best assessment included a clear link to terrorist groups, and entailed previous security warnings, both of which disappeared from the final draft.  The head of America's top intelligence agency called the end result "useless."  Passing the buck to Congress is pathetic, too.  Yes, we should do what we must to protect our people in the future, but that doesn't address what led to four American deaths in Libya.  The lack of sufficient security at our compound in Benghazi had nothing to do with Congress or funding.  It had everything to do with  a series of denied and ignored requests from State higher-ups, the rationale for which remains murky (and for which no one has been held accountable).  Fox News' Chris Wallace asked a question I've been wondering about for some time.  Where was the Commander-in-Chief as the terrorist attack unfolded? Surprise -- Pfeiffer thinks the answer to that inquiry is "largely irrelevant," too:

After the eight-hour raid began, Obama had one single contact with the Secretary of State that day, and zero with the Defense Secretary or the Chairman of the Joint Chiefs.  So where was he and what was he doing?  All Pfeiffer can offer is that his boss "was kept up to date" by someone.  Why the president was not actively engaged during the crisis is totally inexplicable. It's the president's job to make the tough calls during emergencies; instead, Obama seemingly told staffers to keep him posted as he focused on something else.  What that might have been is anyone's guess at this stage.  Still.  Eight months later.  Finally, ABC News' George Stephanopolous asked Pfeiffer if the president views the IRS' targeting scheme as an illegal activity.  The acting IRS commissioner testified that his agency's actions were "absolutely not" illegal on Friday (before changing his tune and saying that he wasn't sure).  What does our law professor president have to say on the matter.  Get ready for the most comical use of the "I-word" yet:

"The law is irrelevant."  Perfect.  (Pfeiffer has hilariously "clarified" that of course the law matters on Twitter). I'll leave you with this quote from a piece in yesterday's Washington Post, which described the shock of IRS employees that they're being accused of partisanship (which Carol also mentioned yesterday):

We’re not political,’’ said one determinations staffer in khakis as he left work late Tuesday afternoon. “We people on the local level are doing what we are supposed to do. .?.?. That’s why there are so many people here who are flustered. Everything comes from the top. We don’t have any authority to make those decisions without someone signing off on them. There has to be a directive.”