Will Benghazi Hurt Hillary Clinton in 2016? 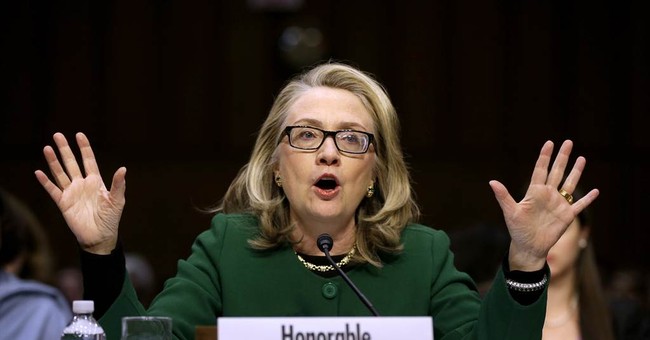 The correct answer to that question is "who cares?  It's not relevant to this crucial investigation."  But this is Washington, and because the next election seems to drive every news cycle, the future political fallout from Benghazi has been thrust front and center by some in the press.  For instance, here's an NBC correspondent placing a partisan lens over Wednesday's Benghazi hearings within minutes of the witnesses being sworn in:


So would there be so much coverage of this Benghazi hearing if John Kerry had been SecState at the time? #doubtful#hillary #2016


The suggestion that the House Oversight Committee's investigation into an unresolved terrorist attack is somehow predicated on impacting an election schedule for 42 months from now isn't just preposterous, it's insulting. I laid out the reasons why on Fox News yesterday:

This week's revelations have only prompted more questions.  Why have there been no arrests, eight months after the fact?  Why did State Department leaders deny requests for increased security, even as attacks on Western targets in Benghazi were escalating?  Why were two stand-down orders issued to the reinforcements in Tripoli, and who made that call?  And who was responsible for the bowdlerized, dishonest "spontaneous protest" talking points -- which were disseminated even after Sec. Clinton herself was made explicitly aware of the true nature of the attack as it transpired?  (Also, what massive, classified "omission" was Sen. Tom Coburn talking about here?)  To treat the 9/11 Benghazi assault as a proxy fight in a distant election is to ignore the importance and relevance of all of these questions.  As I noted in the clip, Sec. Clinton has more to answer for than ever before, on a number of fronts -- from the lax security presence, to the talking points, to the intimidation and demotion of Greg Hicks.  But the biggest political risk she presently faces is an issue of legacy management.  If Benghazi leaves an indelible stain on her tenure at State, Clinton's strong approval ratings will be exceedingly susceptible to erosion.  Indeed, it was Clinton's desire to avoid questions about her preparedness that may have prompted the false talking points in the first place.  There's another interesting element to the political side of this story that I barely grazed at the very end of the interview.  In 2008, Hillary Clinton's campaign released an attack ad implying that Barack Obama wasn't prepared to field an emergency "3 am phone call" due to his lack of experience:

I mentioned above that Clinton received a 2 am phone call of her own from Benghazi, and botched it.  (Where was Obama?  We still don't know).  But there's another layer to this irony.  Do you recall which surrogate Team Obama dispatched to respond to Hillary's attack at the time?  That would be their trusted foreign policy aide...Susan Rice, who argued that Obama and Clinton were "both not ready" to handle that hypothetical 3 am call:

The Benghazi phone calls weren't hypothetical, and you know something?  Susan Rice was absolutely right back then -- as the very existence of her own falsified talking points last September demonstrated in stark relief.