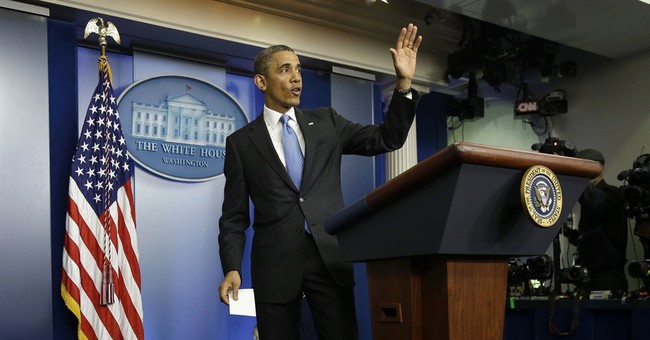 I guess I wasn't alone in my assessment of the president's rambling, defensive presser on Tuesday.  Stick around until the tail end of this clip for the White House's feeble defense:

"A White House official told me that the real source of the president's juice is the American people.  And on the big issues, this White House believes -- big issues like guns, immigration and the budget -- public opinion is with the president."

So the White House believes "public opinion is with the president" on those three "big issues."  Over to you, American people (via CNN earlier this month):

And Gallup, a few weeks back:

A president is in trouble when he’s forced to defend his relevancy, as Bill Clinton did 18 years ago, or to quote Mark Twain, as Barack Obama did Tuesday. “Rumors of my demise,” he said at a news conference, “may be a little exaggerated at this point.” Not wrong--just “exaggerated.” Not forever--just “at this point.” Parsing aside, Obama channeled Clinton’s April 18, 1995, news conference by projecting a sense of helplessness--or even haplessness--against forces seemingly out of a president’s control.

Liberal New York Times columnist Maureen Dowd is none too pleased with Obama these days ("lame duck"), as well -- although a significant element of her beef is about Guantanamo Bay, a subject on which she and the president hold an extreme position.  But at least the public is "with the president" on those other issues...

UPDATE - Two more data points from a new Q-Poll.  Obama's now underwater on guns by double-digits (41/52), and support for a path to citizenship has dropped to a bare majority.  How 'bout a vote on the president's budget, Senate Democrats?