Good news: Angry liberals can now vicariously hunt down and kill the world's most dangerous prey.  No, not human beings; Tea Party Zombies.  The Left continues to usher in our great new age of selective "civility" with the introduction of TeaPartyZombiesMustDie.com, at which anyone -- from White House messaging gurus, to talentless "comedians," to Congressional Black Caucus members, to New York Times columnists -- can quench their (projected) bloodlust by massacring avatars of Tea Party activists.  These zombified targets include "generic pissed off old white guys," Glenn Beck, a blood-drenched Sarah Palin, and a two-headed Koch brothers creature, among others.  Enlightened gamers can choose from a wide array of weapons, including crow bars, crossbows, and firearms, with which to dispatch their living-dead political foes.  A few choice screenshots: 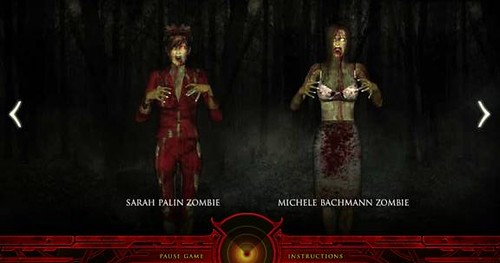 The game's creators -- who, are far as I can tell, are anonymous* at this point -- also offer users inter-level "educational" tidbits about the Tea Party, including quotes from liberals attacking the movement, Fox News, etc: 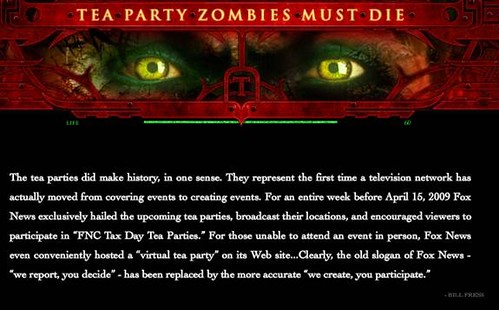 This pleasant addition to our political landscape marks the ultimate confluence of the Left's phony "new tone" moralizing and their nutroots' technological prowess.  Hence, conservatives have morphed from figurative bogeymen into virtual, butcherable bogeymen.  I'll admit that if liberals hadn't wet themselves repeatedly during their pious civility crusades, maybe -- just maybe -- I'd find this game slightly entertaining.  But any propensity towards amusement is immediately stricken from my imagination the instant I picture the indignant media firestorm that would undoubtedly arise if the growling death targets resembled, say, Barack Obama.  In case you're unclear on the rules of the rhetorical road, here's a user-friendly recap:

Anti-Obama death fantasy game: National. Crisis.  Hell, the emergency would be so acute, Congress might even reinstate bipartisan seating for Thursday's presidential address.


To our valued Lefty readers: Don't even try to pretend I'm inventing a nonexistent double-standard here. Spare me.  Oh, and to save you the trouble, once you've slain every last terrorist/racist/zombie, you're rewarded with the following "victory" screenshot.  Congratulations, creep: 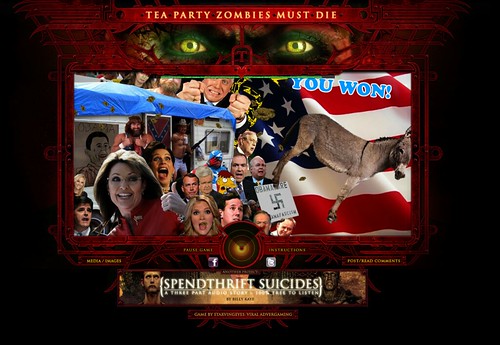 *A friend did a little digging and concluded that the game's creator is a Brooklyn-based graphic designer named Jason Oda.