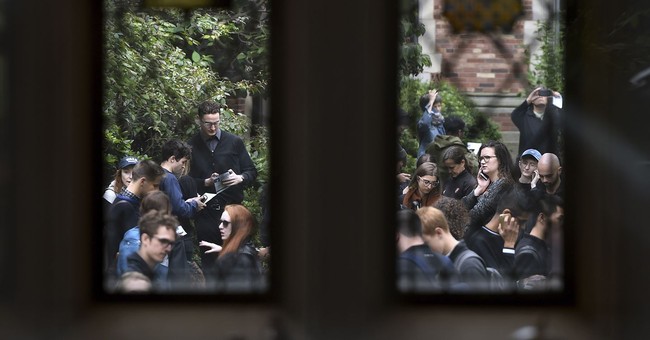 One Ivy League school is getting more than they bargained for after attempting to become ultra-woke this summer, now facing a lawsuit from the Department of Justice which alleges a pattern of discriminatory behavior in violation of the Civil Rights Act of 1964.

The DOJ filed a suit on Thursday over discriminatory admissions practices by Yale University for undergraduates that date back years. According to the complaint from the DOJ, Yale prioritized the skin color of potential students over their academic achievement consistently for years, favoring African American candidates and refusing admission to "scores of Asian American and White applicants each year based on their race."

The complaint also alleges that Yale injures applicants and students because Yale’s race discrimination relies upon and reinforces damaging race-based stereotypes, including in particular such stereotypes against Yale’s racially-favored applicants. And, the complaint alleges that Yale engages in racial balancing by, among other things, keeping the annual percentage of African-American admitted applicants to within one percentage point of the previous year’s admitted class as reflected in U.S. Department of Education data. The complaint alleges similar racial balancing about Asian-American applicants.

The DOJ said that under Title VI of the Civil Rights Act of 1964, the University is allowed very limited consideration of the candidates' racial identity in admissions, but Yale's record shows that their actions were anything but limited.

Although the Supreme Court has held that colleges receiving federal funds may consider applicants’ race in certain limited circumstances as one of a number of factors, the Department of Justice found Yale’s use of race is anything but limited. Yale uses race at multiple steps of its admissions process resulting in a multiplied effect of race on an applicant’s likelihood of admission. And Yale racially balances its classes.

Yale receives more than $600 million annually from the federal government and therefore, as the Civil Rights Act stipulates, agrees not to discriminate against potential students based on ethnicity or place of origin.

As a condition of receiving millions of dollars in taxpayer funding, Yale expressly agrees to comply with Title VI of the Civil Rights Act of 1964, a cornerstone civil-rights law that prohibits discrimination on the basis of race, color, or national origin in programs and activities that receive federal financial assistance.  According to the complaint, Yale receives over $600 million annually in federal funds.

The DOJ also said that Yale has refused to agree to stop racially discriminating against applicants for the 2020-2021 academic school years. Further, Yale refused to set a goal for ending racial discriminatory practices and therefore admits willful violation of Title VI.

Yale is not the only Ivy League college facing heat from the DOJ for attempting to violate the Civil Rights Act in order to be the wokest school in the nation. Princeton University is also under investigation by the federal government after claiming to students this summer that they were guilty of racially discriminatory practices.

"Racist assumptions from the past also remain embedded in structures of the University itself," a self-flagellating letter from the university's president said. The Department of Education took the claim much more seriously than apparently intended.

"Based on its admitted racism, the U.S. Department of Education ('Department') is concerned Princeton's nondiscrimination and equal opportunity assurances in its Program Participation Agreements from at least 2013 to the present may have been false," a statement from the DOE said.

Both circumstances underscore the rank hypocrisy by the "anti-racist" movement that claims discrimination is wrong but flagrantly participates in the practice themselves.