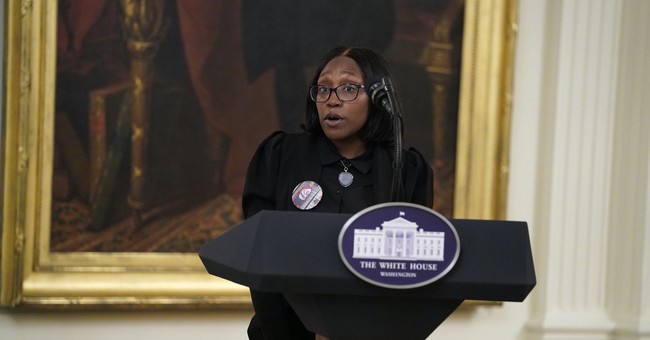 Attorney General Bill Barr announced on Thursday that an arrest has been made in the June shooting death of 4-year-old LeGend Taliferro in Kansas City, MO.

LeGend was asleep in his bed when gunfire from an unknown assailant struck and killed him on June 29.

The child's tragic death sparked the White House and LeGend's family to take action, forming Operation Legend, a joint law enforcement effort aimed at bringing violent criminals to justice and taking them off the streets. AG Barr praised the cooperation of Kansas City police as well as federal agents.

LeGend's mother Charron Powell spoke at the White House last month to condemn the violence plaguing American streets and to call for justice for families and the victims. She assured citizens in the cities that would be helped by Operation Legend that they were not there to make life harder for residents but to help achieve peace in a community ravaged by violence.

"Operation Legend is not to harass, it's not to harm, or to hurt," Powell said. "It is to help investigate unsolved murders, in which one of those happened to be our innocent 4-year-old son...this operation is personal to us. We want justice for our son and others. We have to take a stand in our communities and speak up to help this operation be successful."

Here's Barr's full statement on the arrest of the suspect in the horrifying shooting that took the life of LeGend:

"On June 29, 2020, four-year-old LeGend Taliferro was killed by gunfire while asleep in his bed in Kansas City, Missouri.  His senseless death, which is part of an alarming increase in violent crime this summer, led the Department of Justice to launch Operation Legend.  As part of that initiative, we have sent greater numbers of federal law enforcement agents, investigators, and analysts to work closely with state and local law enforcement partners to remove violent criminals from the streets of key American cities.

Today’s arrest of LeGend Taliferro’s suspected murderer marks a significant step forward in his case and illustrates the potential of Operation Legend more broadly.  The arrest and state charges resulted from cooperation among Kansas City police officers, the FBI, and U.S. Marshals.  This development is a model for joint efforts to solve crimes and reduce violence in other cities.  I thank the state and local law enforcement officers who helped make possible this important step in bringing justice to LeGend, to his family, and to his community.

Although LeGend’s suspected murderer has been arrested, Operation Legend will go on.  Inspired by this success, federal law enforcement will continue working tirelessly to support state and local partners in our shared mission to keep the American people safe and enforce the rule of law."

Kansas City police announced the suspect in custody was Ryson B. Ellis, 22. They praised the efforts of detectives in delivering justice in the case.

BREAKING: 22-year-old Ryson B. Ellis has been has been charged with the murder of 4-year-old LeGend Taliferro, who was killed while asleep in an apartment June 29. LeGend is the namesake of #OperationLeGend. Great work by detectives getting justice for his family. pic.twitter.com/JafzaKc8pa

The president confirmed the arrest of Ellis during a press conference on Thursday evening.

President @realDonaldTrump: The killer of LeGend Taliferro has been caught! pic.twitter.com/FbTHYvlt49

By the beginning of August, the Department of Justice announced that Operation Legend had expanded into Cleveland, Detroit, and Milwaukee as well as ongoing investigations in Kansas City.

Speaking at the White House in July, less than a month after the death of her child, Powell shared her fondest memories of LeGend while also speaking for American communities rattled by spikes in child homicides and surges of senseless violence.

"My one and only child who fought through open-heart surgery at four months is gone, due to senseless gun violence," she said. "Children are supposed to be our future and our four-year-old son didn't make it to kindergarten. I stand here today as a mother fighting against violence for my son, LeGend Taliferro." She concluded her remarks while fighting back tears.

"One thing about LeGend," Powell said. "He was exciting. He loved basketball. He was a ball of joy. I want his legacy to live on and I want us to continue to fight against violence and also get justice for my son and others."

Charron Powell, the mother of 4-year-old LeGend Taliferro, who was struck by gunfire as he was asleep in his bed in Kansas City, MO on June 29, 2020, speaks about the importance of President @realDonaldTrump's "Operation Legend." pic.twitter.com/eWB0pfwm49