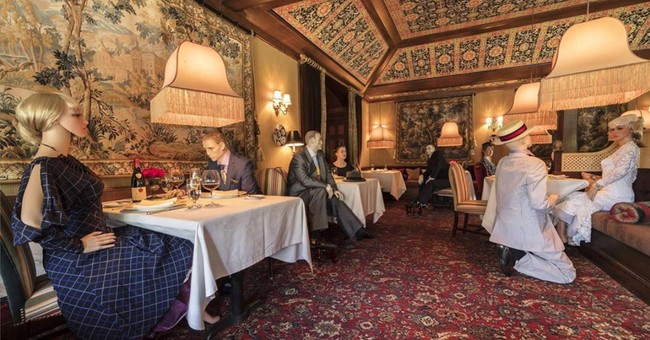 Source: Courtesy of the Inn at Little Washington

The storied Inn at Little Washington restaurant in Northern Virginia has taken a unique approach to state-wide social distancing mandates. The restaurant, which costs at minimum about $600 per dinner for two, will comply with the six-foot distance directive by filling empty seats with unusual guests: vintage mannequins.

*Full disclosure: I worked at the Inn at Little Washington for a short time, several years ago.

As part of the state's phased reopening plan, Governor Northam has permitted restaurants in most counties to reopen indoor dining rooms to half capacity beginning May 29, provided that those restaurants follow strict sanitation and social distancing guidelines. The mannequins at the Inn, which don the style of sharply dressed movers and shakers from the 1940s, will add a distinctive retro vibe to the ambience.

The temporary stand-ins for breathing, eating, and drinking patrons will ideally give the illusion of a fuller, more active dining room as the restaurant eases into its spring season. A spokesman from the Inn said the mannequins explemify the tendency for whimsy oft attributed to the restaurant.

"[The mannequins are] within the whimsical vein of the Inn’s reverently irreverent approach to hospitality," the spokesman said. Whether the fully plastic but well-dressed guests will comfort sporadic diners or terrify them has yet to be determined.

The Inn at Little Washington, known for its theatric approach to hospitality and penchant for dramatic flair, has occupied the small, rural Virginia town of the same name for over 40 years. Chef, founder, and owner Patrick O'Connell has steadfastly steered the luxury destination spot throughout that time. In the time before the virus forced restaurants to shutter across the nation, O'Connell was introduced to diners at the coveted kitchen tables via dramatic announcement, a dimming of the lights, and an elegant robe and cap, nodding to his nickname, "the pope of American cuisine."

The dramatic substance of O'Connell's vision isn't limited to his elaborate, top-of-the-line kitchen, either. The dining room, kitchen, and luxury suites of the Inn at Little Washington were a collaborative effort between O'Connell and famed London stage and set designer Joyce Evans. The staged mannequins, who are shown in various poses, including a man in a seersucker suit and straw hat bending down on one knee, were set by Arlington’s Signature Theater and Design Foundry.

The mannequins will not be limited to just background filler, either. O'Connell will instruct his staff to approach the mannequins as if they were real, hungry, paying, guests and greet them with wine and the generous hospitality the Inn is known for. Sticking to the rules of social distancing but not breaking the spell of theater in the dining room, the staff will wear protective, custom-designed masks with Marylin Monroe smiles for the women and George Washington chins for the men. O'Connell has also been known to require his female staffers to wear bold lipstick, an "on-stage" necessity he refers to as "lip ice." The illusion of Marylin's famed lips seems par for the course for Inn's "always on-stage," approach to service.

Though O'Connell's whimsical approach touches every element of the Inn experience, his culinary technique is quite serious, and world-renowned. The Inn often tops lists counting the best restaurants in the area and even in the country. The Inn at Little Washington is currently the only recipient of the highest Michelin rating of three stars in the Washington, DC area, making it "worth a special journey," according to the guide.

Despite being 70 miles west of the District, O'Connell and his team are uniquely positioned to welcome the first round of high-end diners in the Capital metropolitan area as DC, Maryland, and metropolitan Virgnia counties are several weeks if not months away from reopening. The mannequins, the whimsy, and the world-famous food will be ready for diners by the end of May.