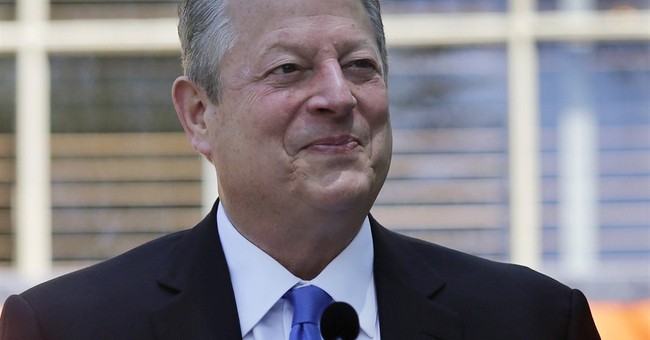 Katie wrote up the tantalizing story that Al Gore was perhaps on the verge of launching a presidential exploratory committee. Evidently, the shaky and scandalous Hillary Clinton campaign is making the Democratic Party frazzled. Unfortunately, however, Politico reports that the likelihood of a Gore vs. Hillary slog is exceedingly (and depressingly) unlikely.

One might say that the former Democratic presidential nominee has (ahem) other priorities:

Despite some hopeful speculation among Democrats that Al Gore might jump into the 2016 presidential race in the face of Hillary Clinton’s troubles, people close to the former vice president and Democratic nominee say he’s not considering it.

Another adviser told the outlet: “I just don’t think this is on his mind.” For shame. Guy and Matt, meanwhile, have both written about the swirling, not unsubstantiated rumors that Vice President Joe Biden is seriously testing the waters, and therefore hasn't ruled anything out yet. Throwing Al Gore into the mix (along with Bernie Sanders, whose rise in the polls is nothing short of spectacular) and Hillary Clinton has a real problem on her hands.

But of course, it appears the climate change guru is on to bigger, and dare I say, more pressing matters than running for president. Apparently, trying to save the world is a full-time commitment.