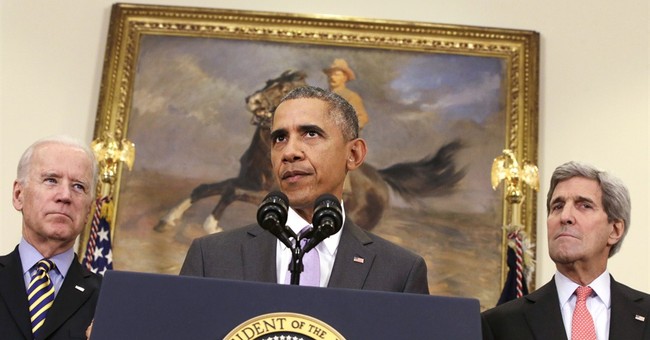 After burning alive a captured coalition fighter pilot in a cage earlier this month, a seemingly new low even for ISIS, a videotape surfaced Sunday showing the rank and file beheading 21 Coptic Christians in Libya.

Perhaps acts such as these no longer faze us anymore – after all, the explicit targeting of Christians by ISIS is nothing new – but the madness shows no signs of ending. While Pope Francis and other faith leaders have condemned the killings and called the victims “martyrs,” Ed Morrissey reminds us the White House still refuses to acknowledge the obvious fact that the victims subscribed to a specific religious sect. Referring to them in a press release simply as “Egyptian citizens" washes over, if not totally takes away from, their sacrificial and Christ-affirming deaths.

Maybe continued and purposeful evasion about whom ISIS targets, however, is just one reason why the president’s foreign policy disapproval numbers are steadily rising. Now, more than half of Americans are giving the president poor marks dealing with this global jihadist threat, according to a new CNN/ORC poll:

Americans are increasingly unhappy with President Barack Obama's handling of ISIS, and a growing share of the nation believes that fight is going badly, according to a new CNN/ORC survey released Monday.

The CNN/ORC poll found 57% of Americans disapprove of how Obama is handling the threat posed by ISIS, a significant decline in support for the President over the past few months. In late September, that number was 49%.

These numbers reflect a broader disappointment with the president’s stated objective and strategy of degrading and ultimately destroying ISIS. To put it bluntly, it doesn't appear to be working.