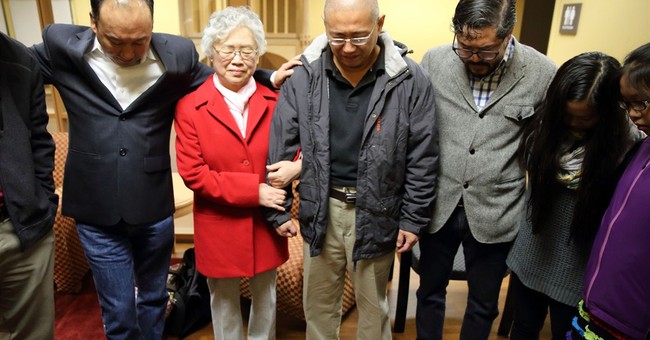 This story broke over the weekend but it merits some additional attention because of how significant it is.

You’ll recall, perhaps, that two years ago Kenneth Bae – a devoted Christian and father – was leading a tour in North Korea when he was unexpectedly arrested for subversion. Since that time, he has been handed down a years-long prison sentence, subjected to hard labor, and in and out of hospitals due to his declining health.

More recently Matthew Todd Miller was also detained in North Korea, although for a different reason -- namely, allegedly attempting to defect to the Stalinist state. Now, however, both are safely back in the United States. They follow in the footsteps of fellow American Jeffrey Fowle who was also released by the regime just last month (via the Associated Press):

Kenneth Bae arrived home after years of imprisonment in North Korea, expressing his gratitude to the U.S. government for securing his release and revealing that his time there offered lessons. And his sister said he had one stipulation for his first meal back home: No Korean food.

"He said, 'I don't want Korean food, that's all I've been eating for the last two years,'" Terri Chung said Sunday outside her Seattle church. "We had a late night eating pizza." Bae and Matthew Miller, another American who had been held captive in North Korea, landed Saturday night at a Washington state military base after a top U.S. intelligence official secured their release.

This begs two questions: How and why were they released? I’m afraid the answers to those questions, perhaps, will always remain a mystery. But we should at least thank James Clapper for his diplomatic efforts. He was sent to North Korea on behalf of the president to handle the negotiations. According to numerous reports, he never met with the ‘Supreme Leader’ in person, per se, but did come bearing a letter from the president which he then delivered to the regime. The letter, it seems, had its intended effect.

Why North Korea released these prisoners, however, is a different matter altogether. One suspected theory is because it was in the regime’s self-interest to do so; after all, the negotiations were reportedly first initiated some weeks ago by the North Koreans themselves (via CNN):

Clapper's visit came after North Korea contacted the U.S. government unexpectedly and urged the administration to send a Cabinet-level official to North Korea's capital to discuss the detained Americans, according to two sources close to the matter.

A U.S. official told CNN that Washington believes Pyongyang reached out to show it had the clout to get a Cabinet-level official to visit and because doing so would help solidify Kim's power. The request came about two weeks ago, the official said. Clapper is not a member of Obama's Cabinet, but he is the U.S. spy chief.

Perhaps not surprisingly, Dennis Rodman is patting himself on the back for the diplomatic breakthrough. Who knows if there's any truth to those claims. But be that as it may, North Korea’s willingness to broker a deal has brought two Americans home. And that is something worth celebrating.

I’ll leave you with this: the press release the U.S. State Department issued on Saturday.

The Department of State welcomes the release of U.S. citizens Kenneth Bae and Matthew Todd Miller from the D.P.R.K., where they have been held for two years and seven months, respectively. The safety and welfare of U.S. citizens abroad is the Department of State’s highest priority, and the United States has long called on D.P.R.K. authorities to release these individuals on humanitarian grounds. We join their families and friends in welcoming them home.

We are grateful to Director of National Intelligence Clapper, who engaged on behalf of the United States in discussions with D.P.R.K. authorities about the release of two citizens.

We also want to thank our international partners, especially our Protecting Power, the Government of Sweden, for their tireless efforts to help secure the freedom of Mr. Bae and Mr. Miller.

The Department of State reiterates our strong recommendation against all travel by U.S. citizens to the D.P.R.K.