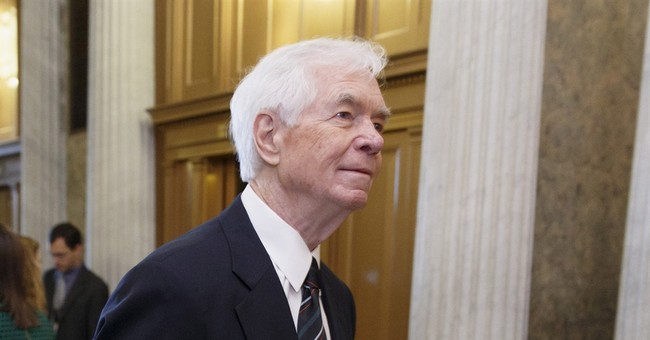 Eight states will host primary elections tonight. But probably the most interesting and consequential contest is in Mississippi where Sen. Thad Cochran (R-Miss.) is fighting for his political life against Tea Party upstart Chris McDaniel. Cochran, for his part, has served in the upper chamber since the late 1970s and although many political observers expected him to retire after his current term, he decided instead to run for re-election. Ever since the campaign has turned decidedly negative: charges of slander, allegations of infidelity and impropriety, and unlawful break-ins resulting in several arrests have all been part of this campaign. It's been a rather strange affair. Meanwhile, polls show that the race is very much anyone's game. The Hill reports that all eyes will be glued to tonight’s election results, in part because if neither candidate garners 50 percent of the vote, there will indeed be a primary run-off:

The bitter contest is the most watched, especially by nervous Republicans, on a day when voters in eight states from coast to coast head to the polls. In Iowa and New Jersey contests, the GOP establishment hopes they land their preferred nominees to improve their chances in competitive November contests. In California, too, the national GOP hopes a polarizing candidates for governor won’t advance and drag other Republicans down with him.

But in Mississippi, the race could have an impact on the Senate landscape this fall. If McDaniel does win, Democrats will be eyeing the race with a renewed interest and are optimistic that their own candidate, centrist former Rep. Travis Childers (D) can take advantage of the schism.

Political observers might not have an answer on Tuesday night, though. A third candidate in the race, Hernando, Miss., real estate agent Thomas Carey, could draw enough of the vote to send the primary to a runoff, if neither Cochran nor McDaniel crack the 50 percent vote threshold.

McDaniel's team believes they'd have the leg up in a runoff, but it's unclear if his campaign would survive the increased pressure. Cochran's campaign, too, would have to grapple with continued scrutiny over the candidate's tendency to dodge the press.

One thing wouldn't change: The race would likely be as nasty as ever.

Besides the big win in Nebraska and a string of victories in Texas, the Tea Party hasn’t had a whole lot to celebrate this election cycle. But if they win tonight in Deepest Dixie that could change all that. They would have successfully ousted an establishment favorite in favor of a more conservative candidate -- that is, someone many believed never really had a chance.

Polls close tonight at 8:00 PM EST. Be sure to follow along with our election coverage -- and look for Guy’s post-election write-up sometime tomorrow morning.

Katie Pavlich
The Reasoning Behind Gavin Newsom Hiding Key COVID Data Is Something Only a Liberal Would Thing Of...
Matt Vespa
Biden's Head-scratching Approval Rating