Boehner: I Can’t Guarantee I’ll Complete Another Term as Speaker 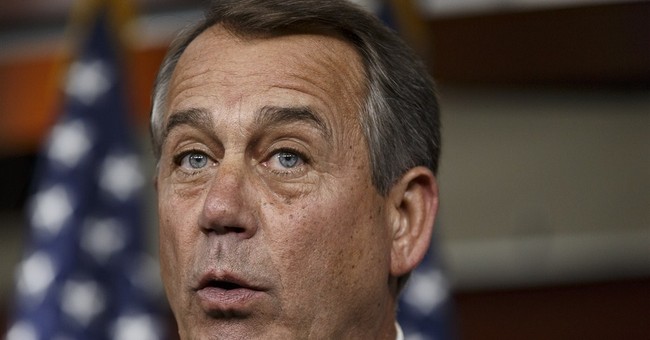 Securing a primary victory in his home district last week was easy as pie. Despite two Tea Party challengers, one of whom embraced questionable campaign tactics, House Speaker John Boehner (R-OH) won the contest fairly easily. And presumably when he wins the general election in November (and his caucus wins enough seats to retain majority control of the House of Representatives) he’ll be sworn in again as Speaker for another term.

But will he stay on in his leadership role through the 2016 elections? In a wide-ranging interview today in San Antonio, Boehner left the door open to possibly retiring early. Politico reports:

John Boehner says he fully expects to be speaker of the House after the next election.

But whether he serves a whole term is another question.

The Ohio Republican, speaking to a luncheon here sponsored by a group of local chambers of commerce, said he can’t “predict what’s going to happen,” and stopped short of fully committing to serving another full two-year term.

Despite a failed attempt by some House Republicans to replace him in 2012, Boehner said he isn’t the least bit worried about losing the Speakership after the 2014 midterms. He claims he has a “good relationship” with members of his own caucus, even if they don’t see eye-to-eye on every issue. Nevertheless, rumors abound that House conservatives will once again call for his ouster sometime before December.

But even if they don't -- or if they do and fail -- it’s still possible House Republicans will elect a new Speaker of the House sometime in the next two years. We'll see what happens.