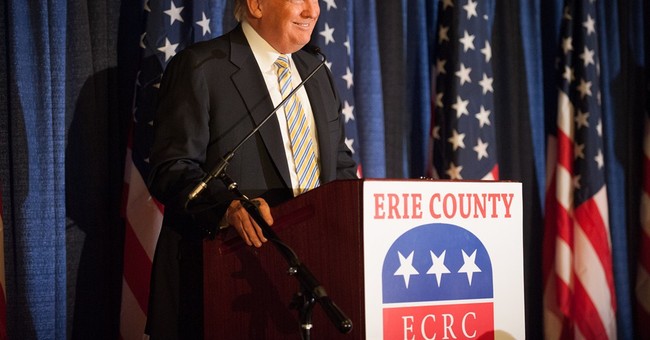 After strolling into CPAC with his eight-man security entourage and posing for pictures with countless college students, a smiling Donald Trump sauntered up to the main ballroom podium and delivered a rambling yet impassioned speech that covered virtually every political issue under the sun.

Then he got down to business.

“I have to tell you,” he said, “that our country is in serious, serious trouble. We owe 17 trillion dollars!”

“We have debt that’s beyond belief,” he continued. “We have deficits that nobody can comprehend. China, which I’ve been talking about for the last five years, just de-valued their currency.”

“[And] the reason they did it is because our leadership is so weak, and so pathetic, they can get away with it," he said. "Believe me, they’re taking our jobs.”

Unsurprisingly, too, he used his plum speaking slot to compare President Obama to one of conservatives’ least favorite American presidents: Jimmy Carter.

“We have a president who just came out today with his lowest job approval ratings -- 38 percent,” he said, referring to the new Fox News poll that dropped Wednesday. “We’re getting into Jimmy Carter territory. And I never thought we’d see something like that [again].”

“I think by next month, we’ll surpass the late, great Jimmy Carter,” he added with a chuckle.

Then abruptly turning to more serious matters, he addressed the Republican Party’s electoral prospects in 2014 -- and beyond.

“I believe the Republicans, and conservative Republicans [are] going to take the Senate,” he asserted matter-of-factly. And when Republicans challenge Hillary in 2016, he added, they’ll “probably” triumph as well.

“[Because we] have so many problems and so little leadership,” he told the audience. “And it’s all about the leadership.”

Curiously, Mr. Trump was also very concerned about the sorry state of America’s roads, bridges and infrastructure -- problems, he said, that are contributing to America's decline. This was unacceptable in his view.

“The bottom line is very simple [to fixing our country],” he concluded. “Make America strong again, make America great again. We have such unbelievable potential. [We] need the right leaders.”

And with that, the speech ended in lukewarm, scattered applause.