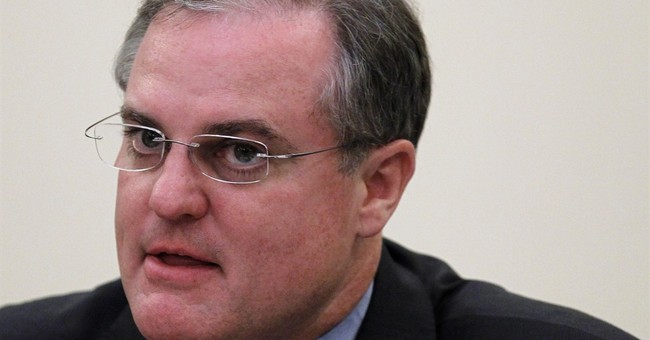 Perhaps it’s too early to start sweating. But Sen. Pryor is down 5 percentage points to Republican Rep. Tom Cotton, according to Rasmussen Reports’ first shakedown of the race:

A new statewide survey of Likely Arkansas Voters finds Cotton with 45% support to Pryor’s 40%. Five percent (5%) like some other candidate in the race, and 10% are undecided. (To see survey question wording, click here.)

A big problem for Pryor, of course, is the “Affordable” Care Act and his support for it. Obamacare is widely panned in Arkansas; only 30 percent of voters in the state, according to the survey, view it favorably whereas 66 percent do not (including 55 percent who say they have a “Very Unfavorable” opinion of it). At the same time, President Obama’s job disapproval rating is 63 percent. The GOP's strategy, then, must be to continue tying Pryor to this president and his unpopular policies. To that end, I can’t help but think ads like these will have an impact:

Americans for Prosperity is set to unveil on Thursday a three-week air attack against Arkansas Sen. Mark Pryor, one of the most vulnerable Senate Democrats seeking reelection this fall, who had, until now, been spared the intense ad blitz the group has unleashed across the country.

The new television ad will spotlight Pryor's support for Obamacare, which the conservative advocacy group has been using to pummel Democrats.

The latest AFP spending against Pryor means that five incumbent Democrats in the Senate facing some of the steepest odds in November are in the crosshairs of the tax-exempt organization, which serves as the main political vehicle of the billionaires Charles and David Koch and their network of allied donors.

Recently, however, Pryor went on the offensive, accusing his opponent of turning Medicare into a "voucher system." Here’s the spot Team Pryor released:

“These despicable scare tactics are typical of Washington politicians like Senator Pryor. In all his time in Washington, Pryor has done nothing to preserve Medicare or keep the program solvent. Instead of protecting Medicare, Pryor voted to cut $700 billion from Medicare to pay for Obamacare, a law he calls ‘an amazing success’ that has Arkansans suffering from lost insurance plans and drastic increases in premiums, deductibles and co-pays.”

“Tom Cotton opposes any changes to Medicare for current beneficiaries or those nearing eligibility,” Ray added in the statement. “Instead, he supports reforms that will strengthen Medicare and keep the program solvent for future generations of Americans.” Democrats like Pryor, however, voted for Obama, and, in so doing, gutted Medicare in the process.

Smart to not let Arkansans forget that important little fact as part of their larger strategy to unseat him.