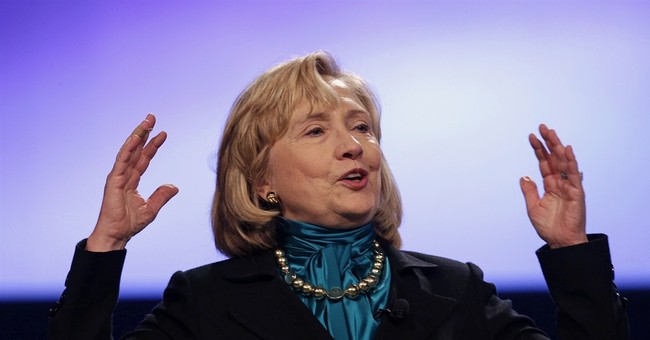 I touched on this phenomenon tangentially in my piece from yesterday: Hillary Clinton is the hands-down favorite to win the Democratic nomination in 2016. No ifs, ands, or buts about it. No one else even comes close. And a Washington Post/ABC News poll released this morning drives that point home:

Clinton trounces her potential primary rivals with 73 percent of Democrats and Democratic-leaning independents, reinforcing a narrative of inevitability around her nomination if she runs. Vice President Biden is second with 12 percent, and Sen. Elizabeth Warren (Mass.) is third with 8 percent.

Hillary Rodham Clinton holds a commanding 6 to 1 lead over other Democrats heading into the 2016 presidential campaign, while the Republican field is deeply divided with no clear front-runner, according to a new Washington Post-ABC News poll.

Although Clinton’s favorability rating has fallen since she stepped down as secretary of state a year ago, she has broad Democratic support across ideological, gender, ethnic and class lines. Her lead is the largest recorded in an early primary matchup in at least 30 years of Post-ABC polling.

I trust the “run Hillary run!” crowd to only grow bigger and more vocal. Why? Because if she passes up her chance to return to the White House (she almost certainly won’t) it seems Democrats are inclined to choose either Joe Biden or Elizabeth Warren as their candidate. This is problematic. While the former is rather personally well-liked across-the-spectrum (hell, even I like him), he is not a serious contender. At the same time, the latter doesn’t have the burning desire to run nor is this going away.

But even if Hillary does run and win, as expected, what specific accomplishments and achievements can she point to as, say, Secretary of State? Guy reminded us yesterday that traveling around and being popular aren’t “achievements” in the traditional sense of the word. Then again, the president didn’t have much of a record to run on when he ran -- and he did just fine.

Meanwhile, of course, on the Republican side of the ledger, the nomination is up for grabs:

The race for the Republican nomination, in contrast, is wide open, with six prospective candidates registering 10 percent to 20 percent support. No candidate has broad backing from both tea party activists and mainline Republicans, signaling potential fissures when the GOP picks a standard-bearer in 2016.

New Jersey Gov. Chris Christie, who was at or near the top of the Republican field in many public opinion surveys last year, appears to have suffered politically from the bridge-traffic scandal engulfing his administration.

The new survey puts Christie in third place — with the support of 13 percent of Republicans and Republican-leaning independents — behind Rep. Paul Ryan (Wis.) with 20 percent and former Florida governor Jeb Bush at 18 percent. The rest of the scattered pack includes Sens. Ted Cruz (Tex.), Rand Paul (Ky.) and Marco Rubio (Fla.), who are at 12, 11 and 10 percent, respectively.

Interestingly, this is the second poll this week showing Jeb Bush finishing as a top contender. His own mother doesn’t want him to run, but apparently the country does? After the Obama years it seems that "Bush fatigue" has dissipated faster than anyone could have possibly imagined.