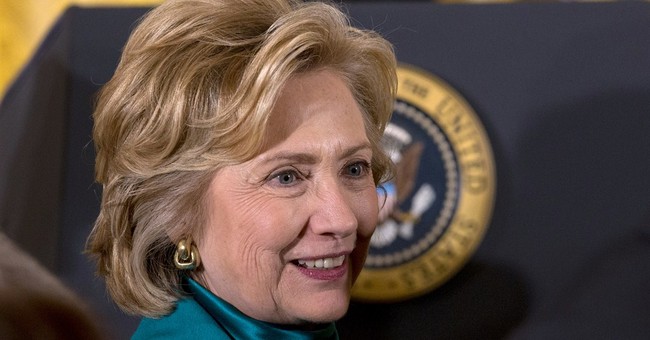 Long-time Clinton confidante Lanny Davis discovered what a Politico reporter found out a few weeks ago -- naming Hillary Clinton's tangible achievements is no easy task, even for admirers. Pressed by Hugh Hewitt on the question, Davis didn't completely whiff, but his answer was vague and questionable:


HH: Summarize for me what she accomplished as Secretary of State.

LD: Well the biggest thing of all is goodwill around the world, which is what Secretaries of State do. I don't know...

LD: I don't know. Well, Libya -- and certainly the intervention in Libya, getting Gaddafi -- you would say is a pretty good achievement for the president. But these are presidential achievements with a partnership with the Secretary of State. What do Secretaries of State do? For example, she was very instrumental in the details of the Iranian sanctions program, which has produced, apparently some results. I'm very skeptical of this deal and Iran on the weaponry...[She's] the most popular woman in the world.

HH: Alright Lanny, we're out of time. But your 'achievement' is one that's been swept away by the president.


Goodwill, miles traveled and nebulous "popularity" aren't achievements. Davis cites Libya as an achievement, but how does that intervention look in retrospect? Does he recall what else happened in Libya during her tenure at Foggy Bottom? Sec. Clinton once called Syria's despotic leader a "reformer." How's that assessment looking these days? As for the Iranian sanctions program, the administration in which she served has resisted tougher sanctions since taking office, though the president is now crowing about how well they've worked -- in the context of warning Congress not to pass another sanctions bill. The dubious "deal" has already unraveled some of the tight sanctions that helped force Iran to the negotiating table in the first place, with precious little in return. The Russian "reset button" superficial gaffe has turned into a policy laughingstock. How did Hillary Clinton's term at State improve America's security and standing in the world? While we're on the subject of tough questions, watch Sen. Mark Udall perform verbal gymnastics to avoid saying whether he'll follow Harry Reid's advice and campaign alongside President Obama in Colorado:

Vulnerable Alaska Democrat Mark Begich extended a stiff-arm, too (skip ahead to the four-minute mark):

The same goes for Scott Walker's Democratic challenger in Wisconsin. Why? The president's approval ratings in 2014 battlegrounds are even worse than his low national numbers. Political oddsmaker Stu Rothenberg thinks Obama didn't alter his trajectory too much last night:

No reason to believe that this speech will change the trajectory toward November. A problem for the DCCC and the DSCC.


“Yes, I do think in 2015, I’m not going to confidently predict that Democrats will take the House back, but what I will predict is that we’re going to pick up seats,” Wasserman Schultz said. McCarthy, to the contrary, was confident the Republican Party would maintain control of the House of Representatives, even suggesting the GOP would win more seats.


Obama's bailed on House Democrats, as has the party's chairman. Uh oh.