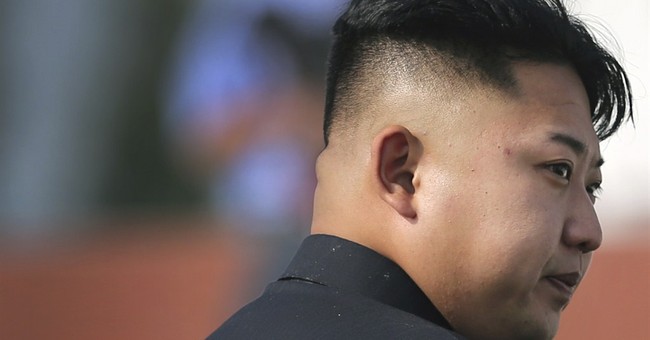 This report is unsubstantiated, naturally, but if accurate, it would confirm what everyone already knows: Kim Jong Un is a depraved cretin whose paranoia and fear of usurpation is rising to levels we haven't witnessed since Joseph Stalin was alive. As a matter of fact, we wrote last month how he executed his own uncle (who showed him the ropes, so to speak, after his father and predecessor died) for treason. Now we’re learning more and more about the way in which he was executed. And it is horrifying.

Basically, if the report is true, the “Supreme Leader” and 300 of his most trusted advisors locked Jang Song-Thaek and five other “traitors” in a cage, and watched while they were devoured and eaten by ravenous wild beasts. Sick:

North Korean dictator Kim Jong-Un sentenced his uncle to be eaten alive by a pack of 120 wild dogs in a savage punishment for treachery, it has been claimed.

Jang Song-Thaek, 67, along with five close aides, was stripped naked and thrown into a cage of hounds which had been starved for three days, according to new details emerging from China.

The pack of animals spent more than an hour mauling the group in a punishment called 'quan jue', or execution by dogs, a report in Chinese newspaper Wen Wei Po said.

The tyranical leader of the communist state had accused his uncle - once seen as North Korea's second most powerful man - of treason and corruption and described him as 'scum' and 'factionalist filth' during his recent New Year message.

His uncle’s other crimes? Womanizing and “dreaming different dreams.” You can’t make this stuff up:

His supposed crimes against the regime included having ‘improper relations with several women’ and having ‘wined and dined at back parlours of deluxe restaurants’.

In addition, Jang was said to have ‘squandered foreign currency at casinos while he was receiving medical treatment in a foreign country under the care of the party’.

Worst of all perhaps, in the twisted logic of this supposed workers’ paradise, was that Jang was guilty of ‘such factional acts as dreaming different dreams’.

It’s also worth noting that the grisly murders were exposed by a Chinese newspaper, indicating that even North Korea’s greatest ally and benefactor is alarmed by Kim Jong Un’s suppressive tactics:

The fact details of the barbaric punishment emerged in a newspaper, viewed as Beijing Government's official mouthpiece, in Hong Kong, has been seen as another signal of China's authorities losing patience with its wayward neighbour, according to The Straits Times.

Kim Jong Un is proving to be as evil as his father. Perhaps it's time someone delivered Dennis Rodman that memo?

UPDATE: Seems unlikely this report is actually true. Then again, who really knows?