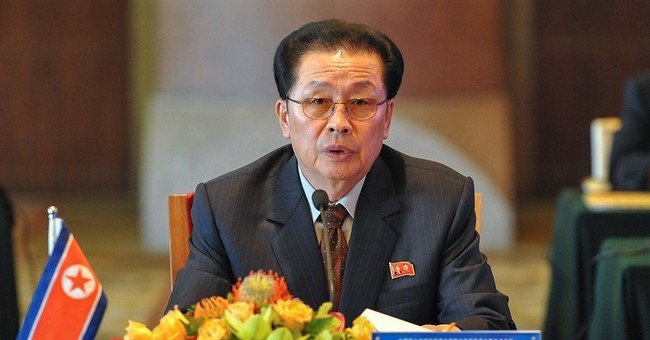 The details are rather hazy -- but perhaps the best explanation is that the deranged North Korean ruler felt threatened and wanted to send a message.

A stooped figure in handcuffs, condemned by a military tribunal, then taken for immediate execution Thursday, Jang Song Thaek is now vilified as "traitor" and "human scum" in North Korea, where until recently he counted as its second-most-powerful figure.

The dramatic downfall of Jang, the uncle and apparent mentor of North Korean leader Kim Jong Un, surprised even veteran observers of the brutal regime founded by Kim's grandfather. Many analysts agree Kim Jong Un, 30, is trying to consolidate his rule, but the wider implications for this tightly sealed state remain as tough to fathom as ever, they said.

Worse, it appears Kim Jong Un -- the grandson of North Korea’s “Eternal President,” Kim il Sung, who founded the DPRK -- is more deranged and bloodthirsty than his predecessors:

"His father and grandfather got rid of a lot of people, but did it in a very quiet manner, not making big news out of it," said Tong Kim, a North Korea expert at Korea University in Seoul, who expects the aunt, as a direct blood relative, will survive.

Kim Jong Un and his close associates "must have felt intimidated if not threatened, so decided to get rid of Jang first," Tong Kim said.

Even China, North Korea’s biggest support and benefactor, is concerned about the country’s political instability:

"Beijing won't invite Kim to visit in the short term, because Beijing is not happy about some of his policies," Cai said. Unlike his father, a regular guest whose visits prompted hope of Chinese-style economic reforms, Kim has yet to visit China during his two years in power.

Several of the charges against Jang, who previously steered economic relations with China, mention a "foreign country" and "show Kim Jong Un doesn't want to rely too much on China like before," Cai said. Still, Jang's removal will "postpone" but not cancel economic co-operation between the two countries, he added.

My hunch is that Kim Jong Un will kill, torture and enslave anyone and everyone who threatens his rule. This includes blood relatives. Incredibly, Jang Song Thaek reportedly advised Kim Jong il, Kim Jong Un’s father and predecessor, which suggests that the country is under new management, and old allegiances are meaningless. It’s worth repeating, too, that North Korea is one of the most isolated and oppressive nations on earth; indeed, one Chinese expert quoted in the article above said the regime is “crueler than the fascists.” I believe it. If the new head-of-state is happy to subject his uncle to a military tribunal and then execute him (a guy who presumably was in positions of leadership way before the “Supreme Leader” was even born), there’s probably some truth to that statement.