Grab the Popcorn: John Cornyn Is Getting Primaried 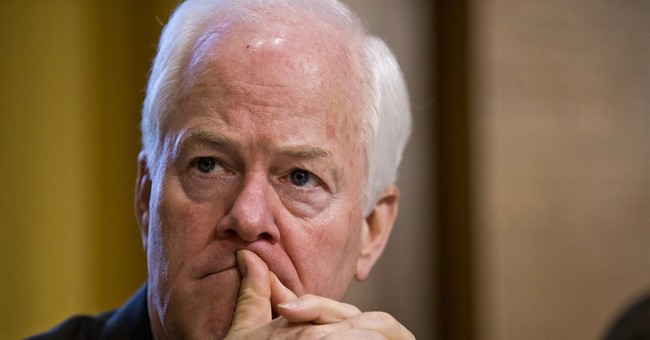 On Monday, with only minutes to spare, Rep. Steve Stockman (R-Tex) unexpectedly filed the necessary paper work to primary his fellow Texas Republican, Sen. John Cornyn. Cornyn is up for re-election next year.

Texas Republican Party spokesman Spencer Yeldell confirmed reports that Stockman withdrew his application for his congressional seat and filed papers to run in the Senate race.

Monday was the filing deadline to enter the race. The primary is March 4.

Stockman was elected to the House last year and has been an outspoken critic of President Barack Obama’s Affordable Care Act, or Obamacare.

Cornyn was elected to his second term in 2008, taking 55% of the vote against Democrat Rick Noriega.

Question: Why is Stockman (a fiery Tea Partier himself) primarying a guy National Journal described as recently as last year as the second most conservative member of the upper chamber? Because he betrayed Ted Cruz, or something (via WND):

Stockman told WND he is filing the paperwork Monday evening and that he is running against his fellow Republican because, “We are extremely disappointed in the way he treated his fellow congressmen and broke the 11th commandment and undermined (Sen.) Ted Cruz’s fight to stop Obamacare.”

The Texan added, “And now, it looks like Cruz was right and Cornyn was wrong. He (Cornyn) sided with the president, essentially, in making sure Obamacare became law while Cruz did everything possible to stop it.”

It wasn’t just what Cornyn did, but how he did it, that rankled Stockman.

“If you disagree with someone, that’s fine, but I really believe you should do it privately, not so publicly,” he said. “He made a big show of removing his name from a letter supporting Cruz.”

For their part, some on the Right would perhaps welcome this fight. Cornyn, they argue, isn’t a True Conservative anyway:

John Cornyn is an establishment Republican who's hostile to grassroots conservatives. Replacing him w/ Steve Stockman would be a big upgrade

Since Stockman is apparently jumping into this race because Cornyn stabbed Ted Cruz in the back, so to speak, how will the junior Senator react to the news? Will he back the “establishment” candidate, even though Cornyn famously abstained from endorsing him when he had the chance? Or will he just sit this primary out? Or, better yet, will he throw all his weight behind Stockman? Now that would make things interesting. But for whatever reason Cruz has reportedly hinted he won't directly help conservative challengers unseat Republican incumbents. So there's that.

As expected, a Cruz spokesman told the DC that Texas’ junior senator is “unlikely” to take sides:

Cornyn’s fellow Texas Republican Senator, Ted Cruz, whom many of those outside groups tout as an ideal of what a Senator should be, has praised Cornyn, but declined to endorse him. Reached for comment, Cruz’s press secretary Catherine Frazier told The Daily Caller that Cruz still felt he was “unlikely to get involved in incumbent primary races.”

I suspect he’ll let the two Republicans duke it out just like Cornyn himself did last year when Ted Cruz and David Dewhurst were vying for the Republican nomination to occupy the open seat the former currently holds. But if that’s the case, Stockman would almost certainly need some other kind of game-changer to make this race interesting. After all, starting off in debt isn’t a winning campaign strategy, especially when attempting to unseat a popular (conservative) incumbent from a state as red as Texas:

Cornyn, the GOP whip, spent four years running the party’s Senate campaign. He has $7 million in the bank and access to plenty more, whereas Stockman’s campaign is in the red, with $32,027 cash on hand and $163,010 in debt.