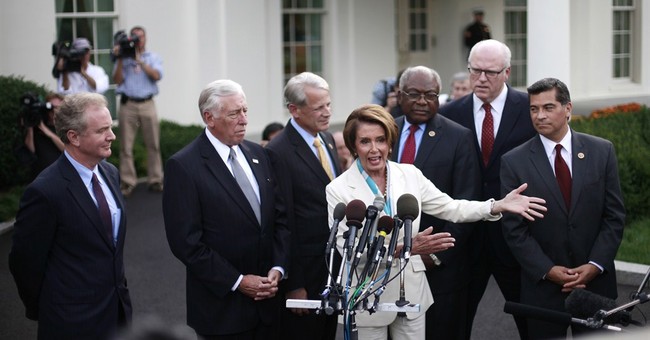 Democrats need to win 17 House seats in order to recapture control of the lower chamber in 2014. So can they do it? Let's take a look: Before the government shutdown, most fair-minded Democrats would probably have said ‘no.’ But now they’re whistling a different tune it seems, arguing that their prospects have improved considerably. Why? Because Congressional Republicans quixotically tried to defund Obamacare, and in the process, ruined what little standing and credibility they had left with the public.

Here’s MSNBC political analyst Chuck Todd discussing some of the issues at play here on “The Cycle” last week:

Todd won’t “rule it out,” he says, adding that the odds of a GOP implosion are “more possible than some people” are letting on. Is he right? Surely it’s no secret that Republicans bore the brunt of the criticism for the weeks-long government shutdown (although Democrats and the president hardly emerged unscathed themselves). But the idea that Republicans have already conceded control of the House is preposterous on its face, especially when one considers House Democrats’ third quarter fundraising totals.

Which brings me to my next point: The National Republican Congressional Committee has compiled a list of what they believe are the seven most vulnerable House members, whom they refer to as the NRCC Red Zone Democrats. And in three of those seven races this past quarter, GOP challengers out-raised their opponents by decisive (and impressive) margins (via the FEC):

What’s more, two other NRCC Red Zone Democrats, Reps. Collin Peterson (D-MN) and Mike McIntyre (D-NC), also boasted uninspiring hauls. This will no doubt make it harder for them to stay afloat come election season, not least because the NRCC is explicitly targeting them:

Let’s not forget, either, that some Democratic incumbents are already being out-raised by their opponents. Never a good sign:

Or that some of the DCCC’s top recruits are underperforming:

Add to the mix a number of other races in which incumbent House Democrats -- Reps. Collin Peterson (MN-07), Mike Obermueller (MN-02), Elizabeth Jensen (KY-06), Emily Cain (ME-02), Erin McClelland (PA-12), to name just a few -- are struggling to raise even six figures, and the Democrats' prospects look even less promising. Sure, this is only a very small sample -- after all, there are 435 House seats that will ultimately be contested next year. But again, Democrats need to oust more than a dozen House Republicans without losing a single seat -- no easy task for any political party.

If anything, GOP candidates are beginning to raise tons of money, thus putting seats into play that otherwise might not have been. So if Democrats think they’re just going to waltz into election season next year and recapture the House, they’ve got another thing coming. Republicans won't back down without a fight. Nor should they.