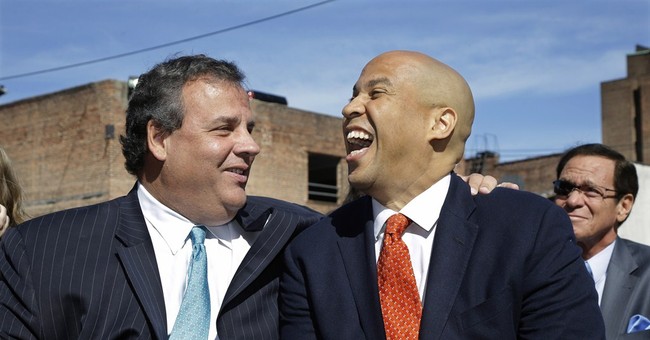 As you’re well aware there are two gubernatorial contests in 2013. In Virginia, the Republican candidate, Ken Cuccinelli, is struggling to keep his head above water. This is a fiercely contested open race, and despite his opponent’s lack of policy ideas, for some reason Terry McAuliffe seems to be gaining momentum. We’ll see what happens. In New Jersey, however, the opposite is true: Governor Chris Christie appears to be sailing to re-election. Why do I say that? Because Christie’s support among Democrats is roughly equal to that of his rival -- an astounding accomplishment for any conservative in a Democratic stronghold like New Jersey (via The Star-Ledger):

Not much has changed as far as voters are concerned in the gubernatorial race.

Gov. Chris Christie is still on track to collect a comfortable victory over Democratic challenger Barbara Buono in the Nov. 5 election, according to Fairleigh Dickinson University's MindPoll released today.

Christie leads Buono 58 to 25 percent, meaning the governor is further ahead of the state senator than he was in August. When FDU conducted a poll then, Christie enjoyed a 50-26 lead. About 90 percent of Republicans said they'll vote for Christie, but only 44 percent of Democrats are in Buono's corner, the poll said.

About 44 percent of Democrats support Christie,

Actually, the survey shows that 38 percent of Democrats said they’ll vote for him on November 5th. Remarkable. That’s only a six point deficit among Democrats. So even if Buono crushes Christie in the two upcoming debates (which I can’t imagine will happen) Buono’s chances of winning are, shall we say, rather slim.

Now, of course, it’s obviously way too early to start celebrating if you’re a Christie fan. But I’ll say this: The man seems to know exactly what he’s doing.