Scott Brown Fuels Speculation: “There’s Nothing Wrong With a Primary” 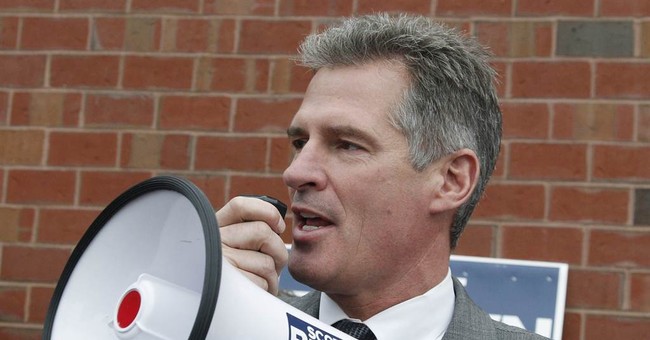 Perhaps the question isn’t if former Massachusetts Senator Scott Brown will run for political office again; the question is what office should he seek? After all, the rumors swirling that he’s seriously weighing a run for the U.S. Senate in New Hampshire aren’t completely unsubstantiated. He’s spent some time there this past year fundraising and taking some shots at his would-be opponent. But the more promising race for him to jump into, I suspect, would be the Massachusetts governor’s contest in 2014. Governor Patrick will not seek re-election -- and with Brown’s surprisingly high approval ratings and statewide name recognition -- the odds of putting together a winning coalition aren’t impossible. At the same time, the Republican field is rather narrow -- in part because Charlie Baker is reportedly the only “GOP all-star” weighing a run. But Brown isn’t too worried about him either, it seems:

Brown — whose political ambitions have been the source of speculation since his Senate defeat last fall — refused to say whether he’ll run for the Corner Office, adding that he, like Baker, will decide by the end of summer.

So we’ll know in the next month or so. Good to know. Meanwhile, it’s worth mentioning that Brown also told the Herald he’s completely “fed up” with Beacon Hill. Gee, I wonder why:

“I’m tired of the lack of accountability from the Corner Office,” Brown said.

“We’ve had a housing scandal, a treasury scandal, a probation scandal, a crime lab scandal, EBT card mess, then you see the taxes and the MBTA pension board isn’t even going to release the records for us. ... At what point do the taxpayers of Mass-achusetts say, ‘You know what? We’re tired of the backroom deals. We’re tired of all the giving our money for no purpose at all.’ They’re fed up. I’m fed up,” Brown said. …

Brown also said a one-party state dominated by Democrats needs a Republican chief executive “so you have that check and balance. ... Otherwise, you might as well take your wallet and give it to Beacon Hill. It’s a joke.”

What happens when a state is controlled by Democrats for too many years? See: Illinois. What happens when a city is controlled by Democrats for too many years? See: Detroit. In other words, if Massachusetts continues down this fiscally reckless path, Brown argues, the same fate awaits the people of his home state. Evidently Bay State voters have no compunction about backing far-left political candidates running for the U.S. Senate, but curiously, they do in fact have a history of electing Republican governors. Might they be open to the idea of a moderate, bipartisan former Senate occupying the Corner Office for the next four years? Why yes, according to a June poll, they would be. Brown is clearly an early favorite to win this race. But the question is, will he put his cards on the table and go all-in? We’ll know soon enough.