Scalise to Dems: No, We Don't Need More Money to Open Schools 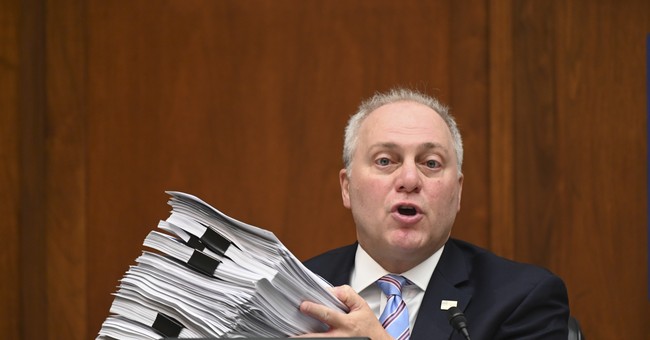 “Let’s get back to helping families, reopen small businesses, and open up our schools right now," Rep. Steve Scalise (R-LA) argued on Fox Business Tuesday morning. "Not a year from now, not one day a week.”

Because, as Scalise explained, there's no reason to wait. Democrats want to pass the new $1.9 trillion COVID relief bill, entitled the American Rescue Plan. But the numbers suggest that the measure doesn't exactly seem to be geared toward the students. According to the Congressional Budget Office, 95% of the money for schools in the bill won't even be spent until 2022. Just $6 billion of the $128 billion set aside for K-12 public schools would be used in 2021.

"So do they really want to pass a bill that's going to delay reopening schools even more?" Scalise asked.

But the nonpartisan Congressional Budget Office says 95% of the money for schools in the bill won't even be spent in 2021.

They want kids to wait that long? pic.twitter.com/c5qxMxtitX

The representative added that $60 billion in previous relief packages designated for schools has yet to be spent.

White House Press Secretary Jen Psaki was confronted about the funds and said simply that they would help schools stretch those dollars. And the administration insisted that they will send resources to schools by need and not based on the CBO projections.

"Well, a big part of the challenge here for a number of schools is that they need - in order to operate responsibly - and given the threat of budget cuts, they need to obligate funds according to spending plans rather than exhausting all balances as soon as they're received," she said.

Senate Republicans perceived her remarks as quite the admission.

The Biden Administration is ADMITTING that school funding measures in their partisan relief bill won't even be spent in 2021.

This push to spend massive amounts of taxpayer dollars has nothing to do with reopening our schools.https://t.co/7SbrZrb4iH

"Our kids can't wait," Rep. Scalise said. "Our kids need to be in school today."