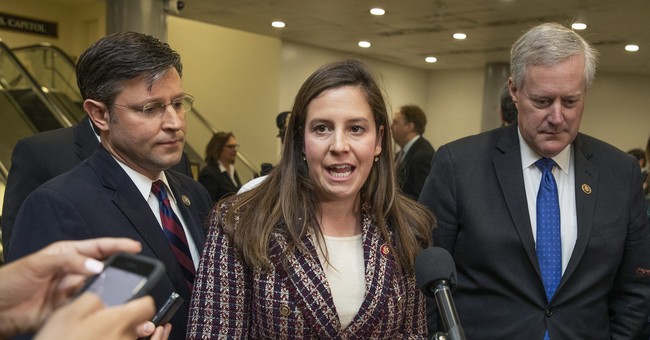 Rep. Elise Stefanik (R-NY) joined countless other lawmakers in calling for some accountability and transparency from the Cuomo administration over the longstanding nursing home scandal. A recent report from Attorney General Letitia James revealed that the Department of Health may have undercounted the amount of COVID-related nursing home deaths by as much as 50 percent. Deciding that enough was enough, Rep. Stefanik has asked the Department of Justice to subpoena Gov. Cuomo and his aides.

Cuomo adviser Rich Azzopardi released a statement on her attempt to get answers. Not only did he completely reject her request, but he threw in a few insults as well.

My response to @EliseStefanik and the treason caucus. https://t.co/17aVBNg9w9 pic.twitter.com/QxBOfzDIiV

"It's no surprise this QANON Trump puppet, her treason caucus and their friends want to talk about anything other than the approaching once month anniversary of the Capitol insurrection that they helped foment and result in the death of a police officer," he writes.

“It is a disgrace that the Worst Governor in America and his sycophant hacks are spiraling out of control discussing anything except his corrupt criminal coverup of thousands of tragic nursing home deaths," deGrasse said in a statement provided to Townhall. "Cuomo and his corrupt team should lawyer up because justice is coming.”

To borrow Azzopardi's line of attack, it's actually seeming more and more like the Cuomo administration is doing all it can to talk about anything other than nursing homes.

Azzopardi is becoming rather infamous for his callous responses to those who are legitimately seeking answers in this tragedy. Janice Dean, the Fox News senior meteorologist who lost both of her in-laws to COVID in New York nursing homes last year, wants an independent investigation into what happened across the state. She's taken the governor to task on vaccine distribution. But Azzopardi responded by offending her in every way possible.

"Last I checked, she’s not a credible source on anything except maybe the weather,” he said.

But she had the perfect counterpunch.

The lady that does the weather can also have strong opinions. Especially when it comes to speaking up on behalf of her family.