China Sanctions Pompeo, Other Officials for 'Seriously Violating' Their Sovereignty 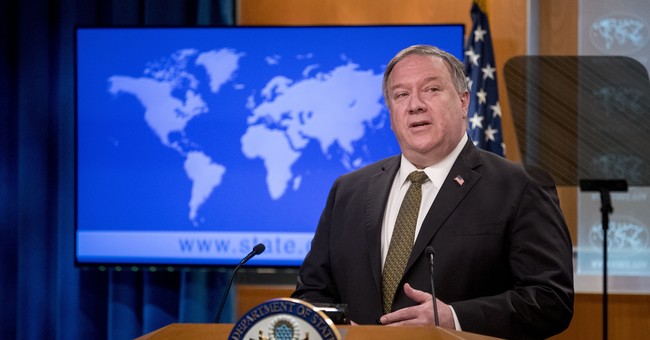 Minutes after Joe Biden was sworn in as the 46th president of the United States, China sanctioned now former Secretary of State Mike Pompeo, former NSA Robert O'Brien, Peter Navarro, John Bolton, and Stephen Bannon, as well as a host of other national security officials. They are now restricted from doing business with China.

The Ministry of Foreign Affairs of the People's Republic of China released the following statement on their decision.

"Over the past few years, some anti-China politicians in the United States, out of their selfish political interests and prejudice and hatred against China and showing no regard for the interests of the Chinese or American people, have planned, promoted and executed a series of crazy moves which have gravely interfered in China's internal affairs, undermined China's interests, offended the Chinese people, and seriously disrupted China-U.S. relations."

They then list 28 officials who they say have "seriously violated China's sovereignty."

On his last day as secretary of state, Pompeo took one more aggressive action toward China, declaring that their crimes against the Uyghur population in western Xinjiang Province amount to a “genocide.” He urged the rest of the world to hold China accountable.

"The United States calls upon the PRC immediately to release all arbitrarily detained persons and abolish its system of internment, detention camps, house arrest and forced labor; cease coercive population control measures, including forced sterilizations, forced abortion, forced birth control, and the removal of children from their families; end all torture and abuse in places of detention; end the persecution of Uyghurs and other members of religious and ethnic minority groups in Xinjiang and elsewhere in China, and afford Uyghurs and other persecuted minorities the freedom to travel and emigrate," Pompeo said in one of his parting statements.

"We further call on all appropriate multilateral and relevant juridical bodies, to join the United States in our effort to promote accountability for those responsible for these atrocities. I have directed the U.S. Department of State to continue to investigate and collect relevant information regarding the ongoing atrocities occurring in Xinjiang, and to make this evidence available to appropriate authorities and the international community to the extent allowable by law. The United States, on its part, has spoken out and taken action, implementing a range of sanctions against senior CCP leaders and state-run enterprises that fund the architecture of repression across Xinjiang."

Pompeo said we should call the Chinese Communist Party what it is: "A Marxist-Leninist regime that exerts power over the long-suffering Chinese people through brainwashing and brute force."