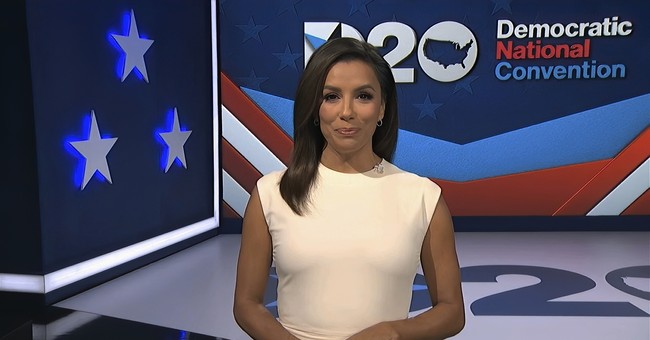 Actress Eva Longoria, who emceed the first night of this year's Democratic National Convention, has long been a celebrity darling of the party. But a remark she made on Monday has turned progressives against her overnight.

As she was celebrating Joe Biden's projected win on MSNBC, Longoria heralded Latina women for showing up for him despite the obstacles. The problem was it sounded like she was praising Latinas while downplaying the role black women played in the election.

“The women of color showed up in big ways," she said. "Of course, you saw in Georgia what Black women have done but Latina women are the real heroines here, beating men in turnout in every state, and voting for Biden-Harris at an average rate of close to 3-to-1.”

Eva Longoria under fire after her interview with @MSNBC about Biden’s victory:

“The women of color showed up in big ways. Of course, you saw in Georgia what Black women have done but Latina women are the real heroines here,” pic.twitter.com/VBcgdTq3cr

"That wasn't surprising to us, Latinas are the CEOS of the households," she continued. "They make all the financial decisions, and health care decisions, and educational decisions. Many Latinas are small business owners, and they wanted a plan for recovery, for themselves. Not for Wall Street. Trump's policies were never aimed at the struggling Latina community."

How Latinas showed up to the polls, despite "voter suppression," new voter ID laws, and a pandemic, she continued, was truly remarkable.

To many voter's ears, it sounded like Longoria was contrasting the efforts of Latina women to black women in the election. And those critics called her out for it, claiming that the actress had "erased" and "dismissed" them.

91% to your 70%. Don’t try to erase us again, thanks. pic.twitter.com/YxsGFfcgdx

You undermined and downplayed Black women’s political work. What a shame to be so very quickly reminded - after a victorious day! - that our efforts, our bodies, our livelihoods, and our lives are constantly dismissed.

And so, as you may have guessed, there is an apology. As she writes, Longoria said she meant to compare Latina women to their male counterparts, not to black women.

Watching this back I can see that this sounds like I’m comparing Latinas to Black women, which I would never do. I was comparing Latinas to their male counterparts, but my wording was not clear and I deeply regret that... Black women have long been the backbone of the Democratic Party, something we have seen played out in this election as well as previous ones. Black women deserve a standing ovation for the work they have done year after year!! Over 90% of black women showed up for Biden. Finally, Black women shouldn’t have to do it alone. Latinas, many who identify as Afro Latina, and other women of color are standing with them so we can grow our collective voice and power. Together we are unstoppable! Again, so sorry for the confusion and lack of context on my part!

Unstoppable!!! Black women turned out 90% for Biden. I as a Latina, aspire to be as engaged as effective as they are!

Longoria may have claimed that Trump's policies did nothing for Latinos, but he made some inroads with the bloc of voters this year. Biden's campaign manager Jen O'Malley Dillon admitted that the president "over-performed" in Florida.

Mr. Biden is now the president-elect, and as he vows to work “as hard for those who didn’t vote for me as those who did,” as he said in his victory speech on Saturday, he must grapple with the fact that Mr. Trump actually improved his showing among Latino voters, from under 30 percent in 2016 to closer to one-third this year, according to exit polls and voter surveys.

And Biden may have received the overwhelming support of black voters, but Trump improved with the demographic by two percentage points from 2016. The president may have gained that support after introducing his new Platinum Plan, which is designed to boost economic opportunities for African Americans.