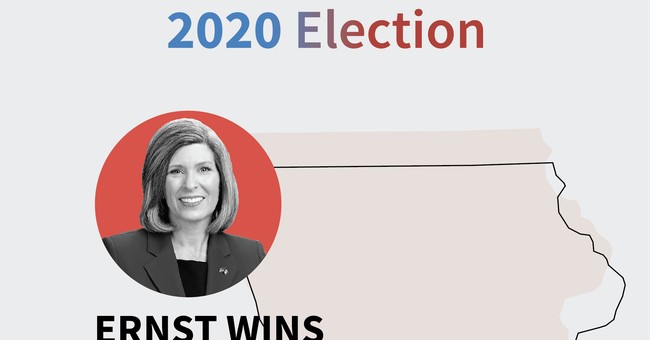 Sen. Joni Ernst (R-IA) has held off her Democratic challenger Theresa Greenfield and will serve another six years on Capitol Hill, outlets are now projecting.

BREAKING: Republican U.S. Sen. Joni Ernst is projected to defeat Democrat Theresa Greenfield in the race for U.S. Senate, according to WHO 13 Insider Jerry Crawford. pic.twitter.com/ulsBfxmT8c

DES MOINES — Republican Joni Ernst, the first woman elected to the U.S. Senate in Iowa, on Tuesday became the first woman re-elected to that federal post after surviving a scare by edging out Democrat Theresa Greenfield in a hard-fought and expensiv… https://t.co/jX9lRX0ACs

Greenfield certainly posed a challenge throughout the campaign. But momentum had been gaining for the incumbent in the final stretch, as a recent Des Moines Register/Mediacom Iowa poll showed Ernst had pulled into a 4-point lead.

Sen. Ernst, the first woman ever elected to the U.S. Senate in Iowa, has led the effort to reform the Violence Against Women Act, which expired in 2018. She had been making some bipartisan progress too, until Senate Minority Leader Chuck Schumer reportedly told the Democrats to stop talking to her, because they couldn’t give vulnerable Republicans any kind of win.

"Anybody that's up in 2020, Schumer doesn't want to move on legislation sponsored by them," Ernst said at the time. "Because it would be a win for me, and we can't have that."

Ernst showed up to President Trump’s rallies in recent weeks, and the Des Moines Register surmises that those visits boosted her support among his base. After Ernst introduced him onstage in Des Moines last week, Vice President Mike Pence thanked the senator for her friendship with the White House.

“She has been an incredible ally of President Trump and the MAGA (Make America Great Again) agenda,” Pence said of Ernst.

The president also made a surprise phone call to encourage Sen. Ernst at her Election Eve rally in Sioux City.

We had a surprise guest for our rally in Sioux City! @realDonaldTrump! pic.twitter.com/LTymzk06jy