Gloria Borger: Hearing Trump Talk About the Election was 'Frightening' 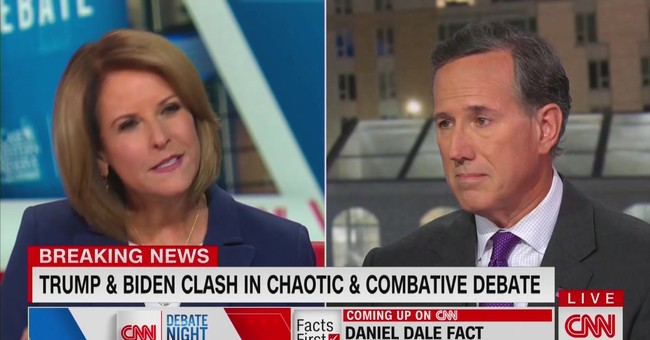 President Trump "frightened" some folks in the media during Tuesday night's debate when moderator Chris Wallace asked him and Democratic nominee Joe Biden about what to expect in the November election.

"How about, at the end, when they were talking about the potential for rigged election?" CNN analyst Gloria Borger said in a post debate discussion. "The president was frightening, threatening, when he talked about the election. He said, 'This is not going to end well.' What does that mean to the American public? That if you go, and you vote in person, or you vote by mail, that something is going to happen?"

"What is going to happen?" she pursued. "Was he predicting violence?"

Gloria Borger on CNN says President Trump was "frightening, threatening," when talking about the election and its results. pic.twitter.com/5vfhthHl0K

Former Pennsylvania senator and presidential candidate Rick Santorum, who served as the lone conservative voice at the table, told Borger her assessment was a bit farfetched.

For weeks Trump has been highlighting the mismanagement of mass mail in balloting because he's had plenty of material to work with. In some states, like Wisconsin, absentee ballots have ended up on the side of a road near a ditch. The president has consistently urged in-person voting for those who want to be assured that their vote is counted.

Wow! 100,000 Mail In Ballots in New York City a total MESS. Mayor and Governor have no idea what to do. Big Fraud, Unfixable! Cancel Ballots and go out and VOTE, just like in past decades, when there were no problems!

Trump's entire Tuesday night performance appeared to shake Borger, who also mused that "a lot of women" would look at the debate "and be frightened."

Other commentators framed Trump as a bully who picked on the poor moderator.

“Donald Trump was the abuser and Chris Wallace was among the abused," according to MSNBC's Nicolle Wallace.

She compared the president to a "misbehaved child" who broke the debate rules. And yet, as several observers have noted on Twitter, it was Biden who started it.