Rochester Police Union Calls for Mayor's Resignation. And She Responds. 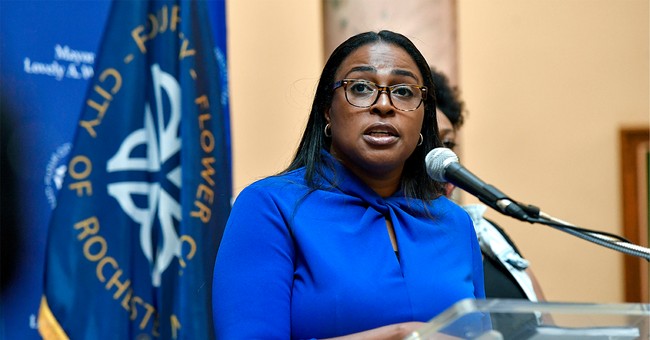 Aggressive protesters have taken over the city of Rochester, NY, following another police custody death. In March, Daniel Prude suffocated and died after being detained by police who placed a “spit hood” over his head. He was reportedly not of sound mind at the time. Once surveillance footage was released, seven police officers were suspended with pay.

City residents who saw the footage for the first time last week were outraged, and decided to display their outrage in the streets. Some people even taunted innocent diners like we saw play out in Washington, D.C., screaming at them while they tried to enjoy their meals. In another protest, one man was reportedly struck by a vehicle.

Prude's death has also resulted in the retirement of Chief La’Ron Singletary and Deputy Chief Joseph M. Morabito on Tuesday, who could no longer withstand the character assassinations.

“The events over the past week are an attempt to destroy my character and integrity,” Singletary said in a statement. “The members of the Rochester Police Department and the Greater Rochester Community know my reputation and know what I stand for. The mischaracterization and the politicization of the actions that I took after being informed of Mr. Prude’s death is not based on facts, and is not what I stand for.”

In a press conference following their announcement, Mayor Lovely Warren promised that she was "committed to institutional reforms necessary in our police department." But, angry police union leaders say change needs to come in her office. They are calling for the mayor to resign.

"There’s a need for change,” Rochester Police Locust Club President Mike Mazzeo said at a Wednesday press conference. “When we have a command staff walk out the door, something is wrong. I think too many people are involved in this that know the truth, and I hope the others learn soon.”

"The safety of the community cannot be carried out with Mayor Warren in Office," said Police union president Mike Mazzeo as he called for Warren's resignation. #ROC pic.twitter.com/SGQ8FYD0Lr

“What is clear is that the problems of leadership go directly to the Mayor’s office," he said on Tuesday. "Our priority now is on the dedicated men and woman, who despite unprecedented challenges, continue to do a very difficult job. Our members remain focused and committed to serving the citizens of this city, despite the lack of support and leadership that we are witnessing coming from our elected officials in City Hall.”

Recommended
Should The Immunocompromised Be Allowed To Force Everyone To Mask And Be Vaccinated?
Scott Morefield

Speaking of those officials, Mazzeo said they've done little else but disparage the city's men and women in uniform.

“City councilmembers are calling our people murderers,” Mazzeo said. “They don’t have knowledge or experience. I can’t recall any councilmen reaching out to me to say, ‘what can we do to help?’ What they have done is shut the door in our face, refuse to hear our concerns, or hear from the people who do the job. On how to get to a better place? They’re on for some other agenda, not to serve the city or the people who elected them."

Judging by the mayor's response, she's not leaving anytime soon.