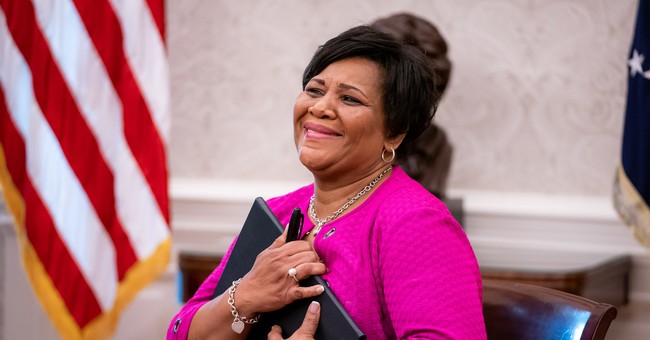 I hope that you kept that box of tissues you needed on the final night of the Republican National Convention. The RNC tugged on the heartstrings all Thursday evening, and Alice Johnson's speech was no exception. The 65-year-old candidly told her story about how she was sentenced to a life in prison for a nonviolent, first time drug offense. She was imprisoned thanks to the 1986 Anti-Drug Abuse Act, a bill co-authored and championed by Democratic presidential nominee Joe Biden. But Johnson was given hope when celebrity Kim Kardashian heard about her story, sympathized with her, and brought it to Trump's attention. He was moved by her situation, and a few days later he commuted the rest of her sentence, setting her free with a second chance.

A day after delivering her powerful speech about redemption, Johnson was summoned to the Oval Office, where President Trump offered her a full pardon. Once again, she was in tears, and so were we.

"We're very proud of Alice and the job you've done and what you represent." pic.twitter.com/RkZmnTe3wP

As Alice Johnson looks on alongside the Resolute Desk in the Oval Office, Pres Trump signs & displays the Grant of Clemency giving Johnson a full pardon. On June 6, 2018, he previously commuted her life sentence for a non-violent drug offense, of which she had served 22 years. pic.twitter.com/hgWb2xHWFO

The president signed the pardon with a black marker and handed it over to a joyful Johnson. He asked Pastor Jeffress, who was in the room, to say a prayer for her, and he obliged.

Six months after Johnson stepped out of prison, Trump enacted the FIRST Step Act, which is expected to help shrink the size of the federal prison population. But the work is far from over, Trump acknowledged, turning to Johnson to say that there are many more people in her situation.

You can watch Johnson's entire RNC speech below.

"By the grace of God and the compassion of President @realDonaldTrump, I stand before you tonight. And I assure you, I am not a ghost. I am alive. I am well. And most importantly, I am free." pic.twitter.com/rMX3mgS7AR

"When President Trump heard about me - about the injustice of my story - he saw me as a person," Johnson said. "He had compassion. And he acted. Free in body thanks to President Trump. But free in mind thanks to the almighty God."