Sen. Tim Scott Sounds Off on How the Media Is Covering His Police Reform Efforts 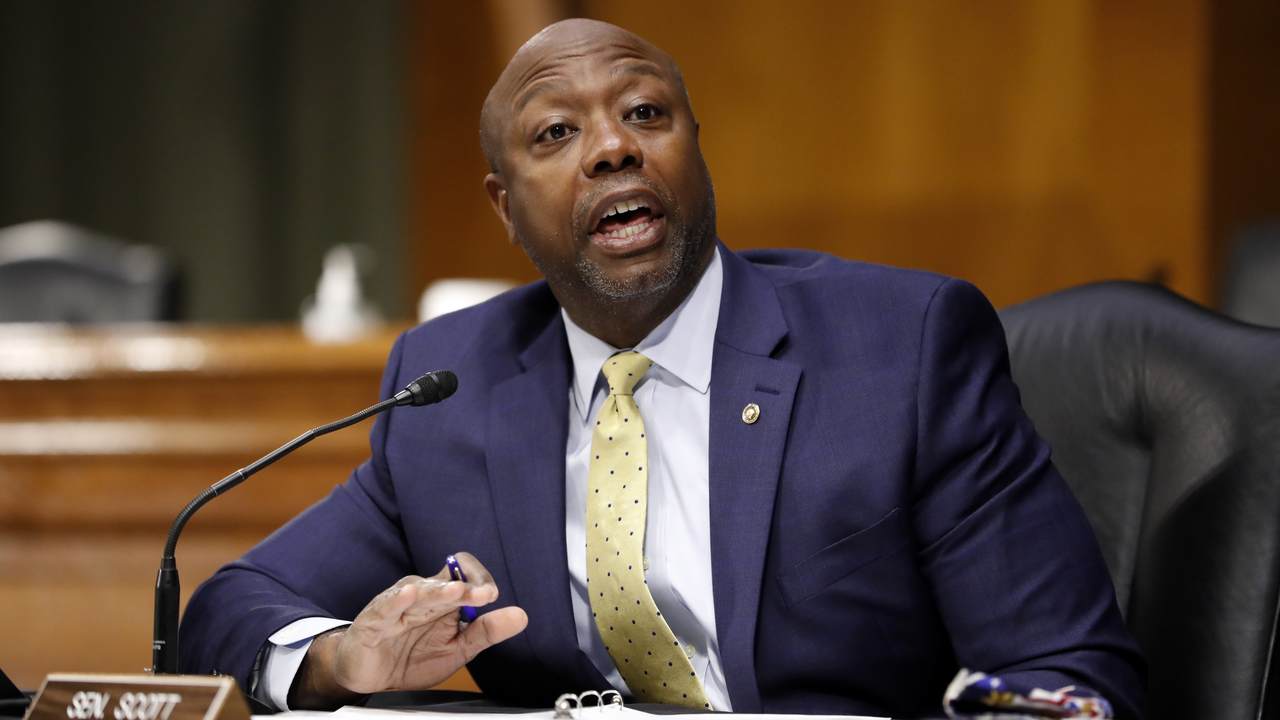 Sen. Tim Scott's (R-SC) five-year-long effort to enact police reform, the JUSTICE Act, went nowhere last month thanks to the Democrats who voted to block debate on it. He was disappointed and frustrated, considering he had left all his emotions on the Senate floor when introducing it. As the only black Republican senator in Congress, he got vulnerable and shared how he, like so many other black Americans, had been targeted by the police. And yet he was ready to make some meaningful change and hold the nation's police departments accountable. Still, the effort was not good enough.

Not only did he regret his colleagues' stubbornness and rude dismissal of his bill, but he was equally disappointed in the media's coverage of his bill. He explained why in his recent interview with AEI's Danielle Pletka's and Marc Thiessen's podcast, "What the Hell Is Going On?"

As he notes, the Democrats have insensitively referred to his JUSTICE Act as "token" legislation or a "half-ass bill." But the media is just as guilty for letting those kinds of comments slide.

WTH is going on with the chaos in American cities? @SenatorTimScott joined @dpletka and @marcthiessen to discuss the JUSTICE Act and partisan delays in meaningful police reform.

"I mean, frankly, I say this sincerely, it nearly brings tears to my eyes right now to hear those comments because what that tells me is that the, I say this sincerely, without hyperbole, that the political elite on the left know they can say the most damaging things to race relations in this country and have no responsibility from anyone," Sen. Scott regretted. "That is a scary thought. When Dick Durbin can say of my legislation, 'It's a token,' when and not a single outlet covers that. And you wonder why there's rioting in the streets."

Sen. Scott explained why defunding the police is a major step in the wrong direction.

When you start demonizing the institutions of authority and especially law enforcement when you start sending the signal that we're removing law enforcement from the streets of our major cities, you send a terrible, damning message to the law-abiding citizens in these communities that are about 99% of them. I grew up in a poor community. I grew up in real poverty. I grew up in a single parent household. I grew up where my mother comes home at 11 o'clock at night, and she has to look to her left and to her right before she gets out of her car.

When you say you want to defund the police, you're saying to the criminal elements that it's going to be easier to take advantage of the good people. That is wrong. It is certainly not right, but it is a part of the consequence that we're seeing in the spiking crime rates. I think, Marc, you correct me here, but I think the murder rates in New York City up 79%, comparatively speaking, to the same time last year, shootings up 64%, robberies up 34%. Those numbers tell a story. When Mayor de Blasio removes the plain-clothes police officers, you can't be surprised by the violence that we see.

But the senator thinks he's figured out why the Democrats refuse to even consider his bill, as well as any other plan presented by his Republican colleagues or the White House these days.

"They prefer the issue to the solution because the issue, they think, is one of the waves they ride to victory in 2020 in November," he said.

"I oftentimes say I didn't know that November came before July, but when it comes to police reform, it must because, frankly, I can't find a Democrat in the Senate, other than the four that voted for the motion to proceed, that's willing to have a serious conversation about sending a signal to vulnerable people trapped in failing communities, too often African-American vulnerable people, that, 'We hear you, we see you, and we're responding to your pain right now because two-thirds of a loaf is better than nothing.'"

Do the Democrats care about police reform? They could have worked on real solutions with Attorney General Bill Barr. They decided to play politics with America’s future and America’s minority communities instead. I am focused on change. They are focused on chaos. #JUSTICEAct pic.twitter.com/u7RD1IE8ka