Kayleigh McEnany Rips the FBI for 'Manufacturing a Crime' Against Flynn 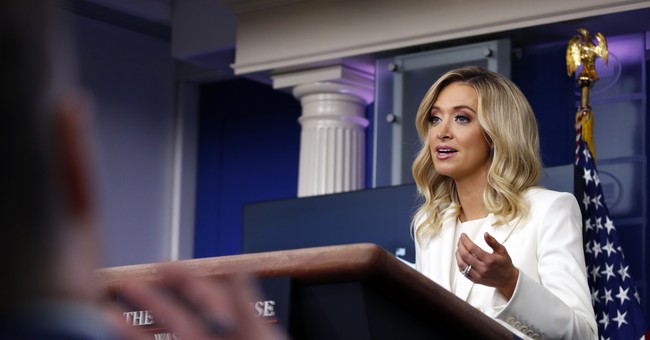 White House Press Secretary Kayleigh McEnany spent the first few minutes of Friday's press briefing blasting the FBI for "manufacturing a crime" against former national security adviser Michael Flynn. In the past two weeks we learned that the agency all along had planned to try and catch the lieutenant general in a lie when they were investigating his contact with Russian ambassador Sergey Kislyak. In light of the FBI's true intent, the Department of Justice had no choice but to drop the criminal charges against him.

"The FBI exists to investigate crimes, but in the case of Lt. Gen. Michael Flynn, it appears that they might have existed to manufacture one," McEnany observed on Friday.

.@PressSec: "The FBI exists to investigate crimes, but in the case of Lt. General Michael Flynn, it appears that they might have existed to manufacture one." pic.twitter.com/qay4shZeKN

McEnany shared the rotten timeline of events against Flynn, from the FBI's unmasking of his identity, to the newly revealed handwritten note in which the FBI's former head of counterintelligence Bill Priestap asked if they should seek the truth or "get him to lie so we can prosecute him or get him fired."

The intelligence community, McEnany continued, was "hunting for evidence against him." She mused that their attempt to try and prove Flynn had violated the Logan Act was their Plan B, since they couldn't prove that the Trump campaign had colluded with Russia.

"If the top leadership of the FBI can target a 3-star general who served this country for three decades, make no mistake, they can target you," McEnany warned.

Recommended
Biden Urges Action on Climate Change: 'We Don't Have Much More Than 10 Years, For Real'
Leah Barkoukis

As McEnany was leaving, a reporter asked her pointedly why she spent the opening part of her short briefing ripping the FBI instead of answering more questions about the coronavirus. To which she replied, "justice matters."