'There Is No Proof!': Debbie Lesko Gives Fiery Speech During Impeachment Debate 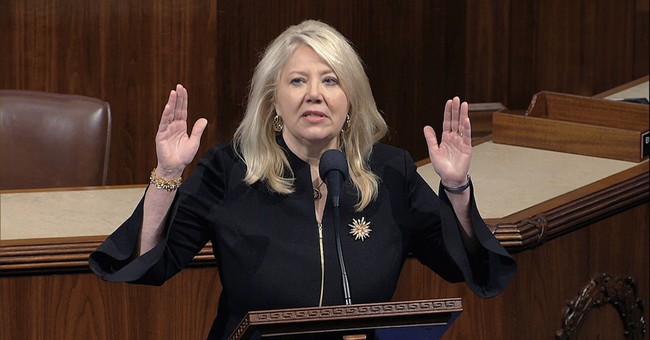 Republicans had plenty to say about the Democrats' "unfair" impeachment process on Wednesday during the House debate on two articles of impeachment, but Rep. Debbie Lesko's (R-AZ) take was a bit louder and a bit more personal. The congresswoman absolutely tore into her Democratic colleagues over what she called a partisan, unprecedented vendetta against President Trump.

The congresswoman said she had spent hours reading transcripts and hearing testimony during the impeachment inquiry against President Trump, to no avail.

"And I can tell you one thing; I believe this is the most unfair, politically biased, rigged process that I have seen in my entire life."

Then she raised her voice.

"There is no proof - none! - that the president has committed an impeachable offense," she continued. "Not one of the Democratic witnesses - not one! - was able to establish that the president committed bribery, treason, or high crimes and misdemeanors as required in the U.S. Constitution."

Recommended
If There's Anyone Who Wants to Be Part of a 'Rally to Protect Our Elections,' It's Donald Trump
Rebecca Downs

She sighed when asking why several Democrats spoke of impeachment before Trump's call with Ukrainian President Zelensky even took place in July. Also, what was the deal with the impeachment process going through the Intelligence committee, where Judiciary panelists couldn't even ask questions of the witnesses in closed-door hearings?

"This is a sad day," she said. "I think the Democrats are tearing this country apart. They're tearing families apart."

The actual votes on the articles of impeachment, abuse of power and obstruction of Congress, are expected to take place between 7 and 8 p.m. tonight, following hours of debate.

Share this on Facebook
Tweet
Gretchen Whitmer Will Be Stripped of Her Emergency Powers
Rebecca Downs
Tucker Carlson Accosted By Hater in Montana Tackle Shop: 'You Are the Worst Human Being'
Rebecca Downs
Tim Scott Remains Hopeful on Police Reform Bill
Landon Mion