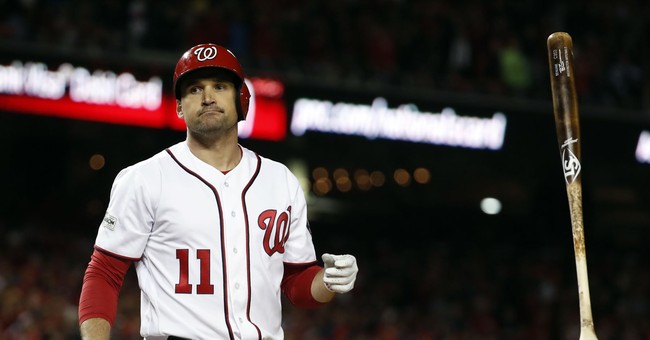 Athletes are coming out in droves this week to support President Trump. I've already written about how UFC player Jorge Masvidal praised the president as "a bad motherf***er." (I promise, it's a compliment.)

Trump invited World Series champions the Washington Nationals to make the short trip over to the White House on Monday to celebrate their historic win. First baseman Ryan Zimmerman, one of the players to speak at the podium, was thrilled to have been invited by a president who has kept our country "safe" and "great."

“Thank you for keeping everyone here safe in our country and continuing to make America the greatest country to live in the world.” - @Nationals first baseman Ryan Zimmerman pic.twitter.com/r7oPujKhZN

"Mr. President, me and my teammates — first of all, we would like to thank you for having us here," Zimmerman said, turning to Trump. "This is an incredible honor that I think all of us will never forget. And we would also like to thank you for keeping everyone here safe in our country and continuing to make America the greatest country to live in the world."

Another Nats player, Kurt Suzuki, proudly donned a Make America Great Again cap at the event. Trump seemed pleasantly surprised by both of the players' outward display of support.

Someone who won't approve of Zimmerman's speech or Suzuki's hat? Their teammate Sean Doolittle. Doolittle refused to accept Trump's White House invitation over the weekend, explaining that he "doesn't want to hang out with somebody who talks like that." Trump's rhetoric, Doolittle mused, may have, in part, "empowered" white supremacists in America.

Several other professional athletes and championship winning teams have declined Trump's invitations to the White House following their wins. NBA star Steph Curry, for instance, is one of the more prominent athletes to say no thank you because he "doesn’t stand for" Trump's agenda. Football was no stranger to tension with the White House either. Trump disinvited the Philadelphia Eagles amid the national anthem kneeling controversy, after which the players shot back to accuse Trump of trying to paint them as "anti-America, anti-flag and anti-military."

The loudest rejection, as least in recent memory, was courtesy of U.S. Women's National Player Megan Rapinoe, who told reporters at this summer's World Cup that she's "not f***ing going to the White House."

Trump and first lady Melania Trump attended the last World Series game in D.C. last week, and they were met with boos. But, from the looks of it baseball fans treated him better in his own house today.