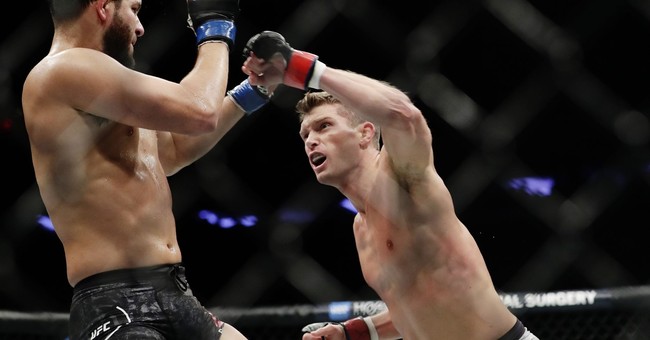 Lately when President Trump has tried to attend sporting events, he has received icy receptions from the crowd. For a refresher, go listen to the fans at the Washington Nationals stadium once more when Trump's face came on the Jumbotron. It wasn't until the crowd realized he and Melania were sitting with a group of veterans that they stopped jeering. Something similar apparently happened when Trump attended a UFC fight at New York's Madison Square Garden over the weekend. More boos.

Yet, this could all be about perspective. From where mixed martial arts fighter Tara LaRosa was standing, the reception was much more positive.

#NEW: Pres. Trump arrives at Madison Square Garden to a positive reaction from the crowd ahead of #UFC244 . pic.twitter.com/OIz8R8IkRu

When UFC fighter Jorge Masvidal addressed reporters, it was obvious he was not one of the president's hecklers. Despite Trump's politics, Masvidal, argued, Trump has proven he's "a bad mother -" Well, you get the picture. (warning: graphic language)

“No matter what your views on Trump as a president, the guy’s a bad motherfucker man.” - Jorge Masvidal

Trump is attending a UFC cage-match in NYC tonight with Masvidal on the main card.pic.twitter.com/ZMNdJrAzNc

A few days earlier Masvidal told the press that he was humbled by the chance to fight in front of the president.

"Not every fighter can say, 'Hey, the president is showing up to my fight', you know?" Masvidal told TMZ. "So, that's humbling in itself."

Trump appreciated Masvidal's speech, F-bombs and all, and called him a champ on Twitter.