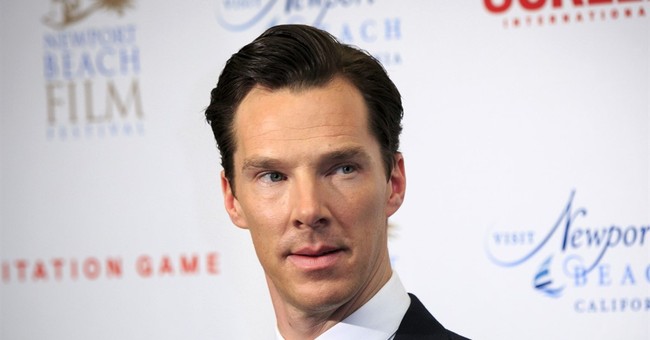 "The View" co-host Joy Behar told actor Benedict Cumberbatch that a lot of people consider him a "hypocrite" for purporting to be a climate change activist while he logs thousands of air miles a week, including his flight to New York on Monday to talk about his new movie, "The Current War."

"You know I'm here to talking to you about a movie," Cumberbatch continued. "Really there should be a little iPad here, we should be doing this FaceTime, which you know I offered. But everyone is complicit in that."

The actor made clear that he doesn't want to tell anyone how to live their life and we can all make our own "individual choices." But, he offered some guidance for those who want to see change.

"You have to put pressures on your government to try and structure something that gives us and our children some kind of a future of hope that is in action and not just words," Cumberbatch said.

Some of those actions, he urged, is a reduction in carbon emission before we "run out of time."

Cumberbatch recently joined thousands of climate change protesters at an Extinction Rebellion protest in London's Trafalgar Square last week. They have been popping up all over the city, including at the Canning Station tube top, where one protester climbed atop a train, only to have Londoners throw him to the ground and pummel him for interrupting their commutes.

Michael Shannon, who stars opposite Cumberbatch in "The Current War" as George Westinghouse, joined him at "The View" to chat about his own climate change activism. He shared photos from a recent trip where he took his children to hear a speech from Swedish activist Greta Thunberg.

Other celebrities like Jane Fonda and Sam Waterston, who star together on the Netflix series "Grace and Frankie," have been willing to go to jail for the cause. Fonda has been arrested two Fridays in a row now protesting in front of the Capitol building in Washington, D.C. Waterston joined her this past Friday.

Actor Sam Waterston was detained along with Jane Fonda and others during a climate protest in front of the U.S. Capitol. https://t.co/A05nw9tmQZ pic.twitter.com/CfDCfa34oQ