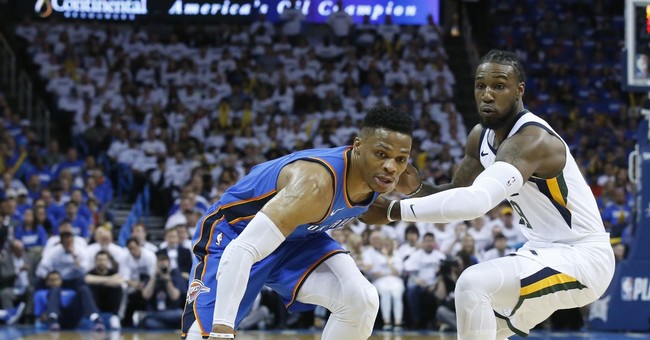 Macfarlane opened her question by noting how the NBA has prided itself on allowing its players to speak openly on political or societal matters. She wondered if the fresh scandal would make them check themselves a bit more.

"I just wonder after the events of this week and the fallout we've seen, if you two feel differently about speaking out in that way in the future."

As soon as Macfarlane had finished asking the question, one of the organizers told her that only basketball-related questions were allowed at the press conference.

"It's a legitimate question," she shot back. "This is an event that happened this week during the NBA."

After Morey posted his pro-democracy message for Hong Kong earlier this month, NBA issued a statement "that reads like a full apologia for Communist China," as Guy reported. Even worse, when American fans showed up to a recent NBA game in the nation's capital with "Free Hong Kong" signs, their posters were confiscated during the playing of the national anthem.

Plenty of other people were outraged that Macfarlane did not get an answer, and that Westbrook and Harden just sat stone faced. Similarly, Steve Kerr, the coach of the Golden State Warriors who has had no issue sharing his political opinions when it comes to President Trump, suddenly had nothing to say when pressed on China earlier this week.